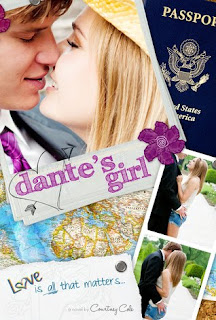 Source: Publisher via NetGalley (Thank You!)

And this year, after a freak volcanic eruption strands me far from home, I have learned these things:

1. I can make do with one outfit for three days before I buy new clothes.

2. If I hear the phrase, “You’re not in Kansas anymore, Toto,” even one more time, I might become a homicidal maniac.

3. I am horribly and embarrassingly allergic to jellyfish.

4. I am in love with Dante Giliberti, who just happens to be the beautiful, sophisticated son of the Prime Minister of a Mediterranean paradise.

5. See number four above. Because it brings with it a whole slew of problems and I’ve learned something from every one of them.

Let’s start with the fact that Dante’s world is five light-years away from mine. He goes to black-tie functions and knows the Prime Minister of England on a first name basis. I was born and raised on a farm in Kansas and wear cut-off jeans paired with cowboy boots. See the difference?

But hearts don’t care about differences. Hearts want what they want. And mine just wants to be Dante’s girl.

I’m struggling to find much to say about this one. Dante’s Girl was a good, fast, fun read. There’s not much for me to complain about. It wasn’t a new concept and it was completely predictable, but it wasn’t bad by any means.

I did find that the simple interactions between Dante and Reece didn’t really fit into what I believe are the proper roles for male and female in that typically men don’t enjoy females fussing over them after an accident in any way that makes them come off as weak. And they enjoy it even less when you indicate that they are weak. And then Dante was completely aware of all of the potential things Reece might have been feeling “the day after” and I don’t find that to be typical of a guy. I mean, sure he might be worried about whether you regret the decision or not, but I don’t think he’s going to be all attuned to the multiple reasons why you might regret that decision. They just don’t think that way.

Other than that, there’s not much to say. 3 Stars. Check it out. Have you read Dante’s Girl? What did you think about it? Let me know!