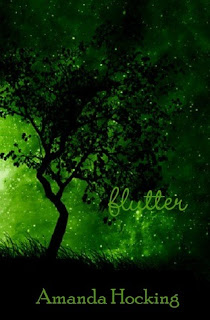 I don’t know about you guys, but I always find it extremely disheartening when I lose something I’ve worked on. That being said, I KNOW I typed my reviews for Flutter and Wisdom (books 3 and 4 of the My Blood Approves series), but I can’t seem to find them ANYWHERE! And having read at least 5 books since reading these, neither book is as fresh on my mind as I’d like. So this review of Flutter and my upcoming review of Wisdom will probably be very short and to the point.

*Spoiler alerts for My Blood Approves (book 1) and Fate (book 2).

At the end of Fate, Jack makes a rash and selfish decision to turn Alice into a vampire. Doing so breaks the blood bond that she has with Peter and creates a bond between Alice and Jack. But despite the fact that Alice is a vampire and is bonded to Jack, these two crazy kids still have to hold back in the romance department because poor little Alice might get carried away and kill Jack. And because of the way the bite feels, poor little Jack would be content to let her.

Because Peter can’t really take being around Alice and not be able to have her, he takes off and gets himself into a precarious situation with a “pack of rabid vampires" off halfway across the world. Alice insists on going with Ezra to find him to bring him home. This causes the “lycan” vampires to find out that Alice is one of the few things that could really hurt Peter. Go figure, right? Ezra makes an exchange with them, and they allow Peter to leave.

The group comes back home. Milo’s gone and got himself a boyfriend. Mae finds out that her biological granddaughter has cancer and is dying. And Jack is beside himself with worry for Alice and jealousy because of Peter. So basically, it’s mayhem. Not to mention that Jane, Alice’s best friend, discovers the secret of the vampire world and is entirely too intrigued by them. She finds herself in an addict situation if you know what I mean.

Anyway…frustration ensues yet I couldn’t really tear myself away. Stupid decisions are made. People behave ridiculously. No seriously, it’s not bad, but I do distinctly remember being frustrated with the decisions the characters made. And because Jack’s turned into a jealous, pansy boyfriend, he whines more than he acts on his feelings for Alice, I’ve decided I’m definitely a Peter fan.

3 Stars for Flutter. Have you read Flutter? What did you think? Let me know!

Posted by Somewhere Only We Know at 4:57 PM