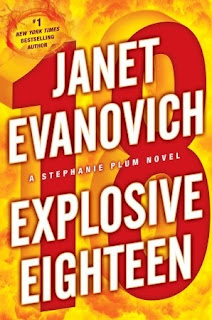 Before Stephanie can even step foot off Flight 127 from Hawaii to Newark, she’s knee deep in trouble. Her dream vacation turned into a nightmare, she’s flying back to New Jersey solo, and someone who sounds like Sasquatch is snoring in row 22. Worse still, her seatmate never returned to the plane after the L.A. layover. Now he’s dead, in a garbage can, waiting for curbside pickup. His killer could be anyone. The FBI, the fake FBI, and guns-for-hire are all looking for a photograph the dead man was supposed to be carrying.

Only one other person has seen the missing photograph—Stephanie Plum. Now she’s the target, and she doesn’t intend to end up in a garbage can. With the help of an FBI sketch artist Stephanie re-creates the person in the photo. Unfortunately the first sketch turns out to look like Tom Cruise, and the second sketch like Ashton Kutcher. Until Stephanie can improve her descriptive skills, she’ll need to watch her back.

Over at the Bail Bonds Agency it’s business as usual—until the bonds bus serving as Vinnie’s temporary HQ goes up in smoke, Stephanie’s wheelman, Lula, falls in love with their “largest” FTA yet, lifetime arch nemesis Joyce Barnhardt moves into Stephanie’s apartment, and everyone wants to know what happened in Hawaii?!

Ok guys, so here’s the lowdown on Explosive Eighteen. It was okay. Having come to expect my Stephanie Plum novels to have me looking like a fool when I literally laugh out loud listening to these at work, Explosive Eighteen fell a wee bit short. The thing was, there was nothing “wrong” with it. It wasn’t overly funny. It was overly anything. It felt like a filler novel. After my full out belly laughing from Smokin’ Seventeen (my review), I don’t suppose I should have expected to be blown away by the follow up to that. I mean seriously, when you’ve got 18 novels in a series (and more to come), how can they all be awesome?

And so Explosive Eighteen was only mediocre to me. These books don’t fall into what I think of as “serious reads.” They are lighthearted and funny. They are quick and playful. So I don’t go into them expecting my world to change or anything like that. And that being said, this one didn’t. It wasn’t bad, there have just been better novels in the series.

So Explosive Eighteen gets a low 3 Stars. (Feeling like I should go back and give Smokin’ Seventeen 4 Stars.)

Have you read Explosive Eighteen? What did you think? Let me know!

Posted by Somewhere Only We Know at 5:35 PM