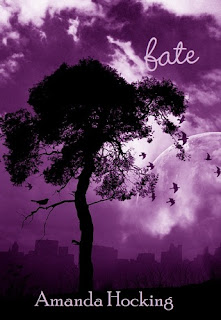 Spoiler alert for My Blood Approves...

If you read my review of My Blood Approves, then you’ll know that I was excited about the slow build up in emotions between Alice and Jack. And while I did like it in My Blood Approves, it was starting to grate on me in Fate. Alice and Jack both have this understanding that they care very much for each other, but they refuse to act on it. There are extenuating circumstances what with Alice being blood-boned to Jack’s bother, Peter, but COME ON! Peter left at the end of My Blood Approves. So….yeah….get your hook-up on people! But because they didn’t really do that so much, I started to feel like it was inevitable that the blood-bond between Alice and Peter wins out in the end. Obviously, Peter has to come back before the end of the book. That’s not even really a question.

That being said, this is one of the rare books/series where my hopes for who the character ends up with out of this crazy triangle that is actually a square when you throw in Alice’s gay brother, Milo—um….I cannot begin to tell you the level of annoyingness that this character was for me. He was annoying in book 1, and he was even more annoying in book 2—has changed multiple times. On the one hand, I want Alice to end up with Jack because they’ve had this emotional connection from the beginning when Peter did nothing but push Alice away. However, when I look at the reasons why Peter pushed Alice away, coupled with the feeling the blood-bond brings on for her (how she feels that she was made to be with him), on top of the fact that she and Jack refuse to act on their feelings for one another, I began to sway back into the direction of Peter. (I’m telling you, this does not typically happen to me.)

In the beginning of Fate, we have a situation come up that allows Alice’s brother, Milo, in on the vampire secret. With his knowledge, Jack, Ezra, and Mae have to spend a lot of time with Milo and Alice really has to take a backseat role. Because of that, a large portion of the book has Alice left alone. She rebels slightly by hanging out with Jane and going to a couple of parties. In an attempt to alleviate some of her bored, Jack takes Alice and Milo to a vampire bar/club….um can anyone smell disaster? DUH!!!!!! I’d like to hit him up-side the head with a 2X4 for that dumb decision. Anyone could tell that wouldn’t end well. This creates a situation where Peter gets to be the hero when he returns. (YAY Peter!)

But with Peter back, matters are more complicated than ever. Peter’s had time to think about the bond with Alice and decide where he stands. But is it too late? Or is it going to let Jack and Alice off the hook to finally be together?

I’ve already begun reading book 3, Flutter, and I have to say that while I really liked Fate overall and I’m giving it 4 Stars, what’s happened between the end of Fate and the beginning of Flutter has me slightly frustrated. Paula tells me to keep pressing on, and I wouldn’t dream of putting it down just yet, but argh! Just argh!

Have you read Fate (My Blood Approves, # 2) by Amanda Hocking? If so, what did you think? Let me know!