Top 10 Series I Want to Start

Top 10 Tuesday is a post hosted by The Broke and the Bookish and this week's topic is Top Ten Series I Want to Start. 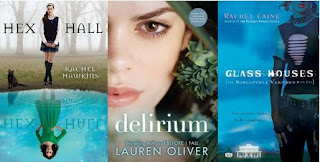 1) Hex Hall by Rachel Hawkins- Because I joined the Witches & Witchcraft Challenge for 2013 and I've only read 1 book that qualifies so far. There have been mixed reviews on this series though, so I'm a little wary.

2) Delirium by Lauren Oliver- I've seen quite a few people really excited about this series and I want to join the bandwagon.

3) Morganville Vampires by Rachel Caine- From what I hear, this series is pretty humorous as well. I love a book that can make me laugh out loud. Talk about being far behind though...

4) Paranormalcy by Keirsten White- I feel so behind. Seen mixed reviews about this one too.

6) Matched by Ally Condie- Also seen mixed reviews about. Need to judge for myself.

7) Maze Runner by James Dashner - Actually have this in my possession, borrowed from the library so hopefully I'll get to mark it off my list soon.

8) Birthmarked by Caragh M O'Brien- Haven't really heard too much about this series, which is one of the reasons why I want to check it out.

9) Anna Dressed in Blood by Kendare Blake- So many people rated this one as a top of 2012, but I didn't get around to it. 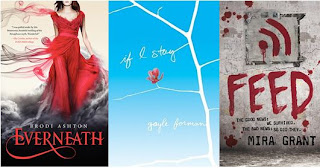 What do you guys think? Any of these ones I need to pick up today??? What series do you want to start? Let me know!

Posted by Somewhere Only We Know at 5:55 PM