Because of Low - Review 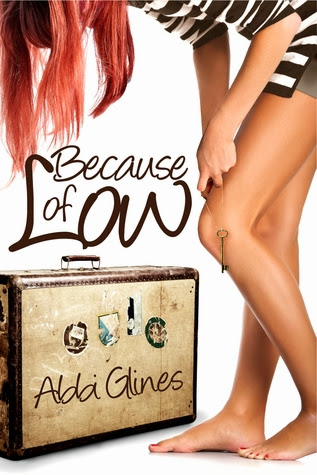 Goodreads description--In my debut novel, Breathe, Sadie may have fallen in love with the teen rock star, Jax Stone, but readers fell head over heels for Marcus Hardy. This is his story…

Marcus Hardy had hoped to enjoy a year away at college while he put the summer he’d rather forget behind him. But instead, he’s jerked right back to the coastal town of Sea Breeze, Alabama due to a family crisis. His dear ol' dad found himself a girlfriend only a few years older than Marcus. So now his sister needs help dealing with their mother who is mentally falling apart. The only bright spot to returning is the fascinating red head who sleeps over several times a week. The problem is she's sleeping in bed with his new roommate, Cage York.

Willow “Low” Foster needs a place to live. Running to Cage’s apartment every time her sister kicks her out isn’t exactly a long term solution. Juggling her courses at the local community college and a part time job doesn’t produce excess income. But Cage has a new roommate and suddenly sleeping over at her best friend’s apartment isn’t such a bad thing. Not when she gets to see those sexy green eyes of Marcus Hardy’s twinkle when he smiles at her like he wants her there.

Even though Cage seems a little territorial where Low is concerned, Marcus finds time to spend with Low without upsetting his roommate. Cage may use his small college baseball star persona to sleep with every hot female in his path but he’s still under the disillusion that when he’s through sowing his wild oats, he’s going to marry Low. Marcus intends to change that assumption for both Cage and Low. Until his carefully laid plans come crashing down with a revelation he never expected. He’ll have to choose between Low or his family. Because once the truth comes out.... there’s no other choice.

I really enjoyed Breathe, right? Well I read Because of Low in just about as much time as it took me to read Breathe, which is pretty awesome because Because of Low is about twice as long as Breathe. Abbi Glines hooked me and reeled me in with these stories. I enjoy her writing style and the dual narratives.

Because of Low had an interesting take on love triangles. Low, our main female character, grew up with Cage. Cage says that he's going to marry Low. Obviously Cage has feelings for Low, but those feelings don't stop him from pursuing encounters with many other females. It appears that Cage expects to one day settle down from his playboy ways eventually with Low. Low on the other hand knows this isn't likely. While Cage has been one of the only constants in her life, she doesn't see him being able to reign himself in in order to be with her the way she would need him to be in order to marry him. Thus enter Marcus.

Marcus, we met in Breathe as he was pining after Sadie. The Marcus from Breathe didn't quite feel like the same Marcus from Because of Low to me. However, this Marcus was just as likeable for the most part as the other. I could appreciate Marcus's "go get 'em" attitude when it came to Low. Despite Cage tell him up front that he plans on marrying Low one day, Marcus decides that isn't going to stop him from pursuing her. Kudos. And this was one of the few things I did see translate from the way Marcus behaved in Breathe to how he behaves in Because of Low. In Breathe, Marcus wasn't shy about going after Sadie, letting her know how he feels about her, despite knowing that Jax was pursuing her. And this situation was pretty much the same.

The main conflict in Because of Low was pretty obvious as time went by. It was a train wreck waiting to happen. Because of my avid reading habits, I've gotten increasingly frustrated with seeing characters walk into a particular conflict. It's not enjoyable for me to be able to predict exactly how the character is going to behave, especially when that behavior is an overreaction or not something that I would do myself. I got so frustrated with Marcus during this part of the story that I wanted to throw the book across the room. This pattern of literature makes me want to pull my hair out. I want to read about smart characters. And Marcus wasn't on the list of smart characters during the conflict and resolution of Because of Low.

While I felt the need to vent about the frustrations I had with this book, I still mostly enjoyed Because of Low very much. Abbi Glines still has a way of making me want more.

Because of Low gets 4 Stars from me despite my frustrations. Have you read Because of Low? If so, what did you think? Let me know!