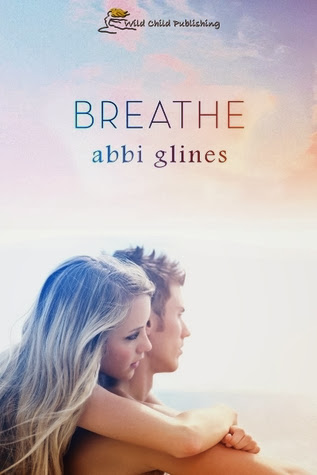 Note: The above links to Amazon, Book Depository, and Booksamillion.com are affiliate links. Affiliate links support giveaways for Somewhere Only We Know readers.

So I ended up taking about a day to finish Breathe. I've read Abbi Glines Too Far series and I enjoyed it. But Abbi Glines pushed me graphically in that series. Breathe was more my speed. Where the Too Far series was a little unrealistic with Blaire's experience level, Breathe seemed much more legit.

Breathe doesn't have an entirely original concept. I've read a couple of books this past year with a rock star or famous character, and I've enjoyed them all. Breathe was no exception. Jax Stone comes to his summer vacation house in Alabama to get away from the public eye. Being from Alabama myself, I appreciated this particular location for Jax's summer home. And I love how Abbi Glines, since she's also from Alabama, doesn't give her characters a dialect just because they're from Alabama. Despite being a rock star, Jax is a very down to earth and humble character. I loved this about him. And of course, it was one of the things that drew Sadie in as well.

Speaking of Sadie, I liked her as far as leading characters go. She didn't seem to have too many complexes or too much baggage weighing her down. Yeah, her dad was non-existent, and her mother lacks well...motherly instinct. While Sadie mom does love Sadie, she definitely doesn't take the parent role that Sadie needs. And now that Sadie has a brother on the way, Sadie does take the parental role. She is the family provider and she becomes the caregiver as well. But she doesn't really wallow in it. I can't tell you how much I appreciated this.

Of course, most YA/NA books wouldn't be complete without a triangle. Marcus is the best friend in this triangle. He steps up, and I really respected him. Despite him having feelings for Sadie, I respect how he handled himself in this book, and I'm thankful to Abbi Glines for allowing him this character trait. And I'm looking forward to seeing if Marcus gets his happy ending in book 2, Because of Low.

My biggest frustration with Breathe was the self-sacrifices made out of guilt. Said sacrifice is never really for the betterment of the other party as the "sacrifice" imagines it to be. And everyone turns out miserable during this time of sacrifice, only for the "sacrifice" to come crawling back when the sacrifice of course doesn't have it's desired outcome. Whew! That was a mouthful. I hope you got that.

Breathe was a fun and fast read. Fans of new adult and contemporary will probably enjoy this one. As will Abbi Glines fans. However, be on the look out for some clichés and the resulting frustration. All in all, Breathe gets 4 Stars from me. Have you read Breathe? What did you think? Let me know!