The Girl Who Played with a Fire - Review 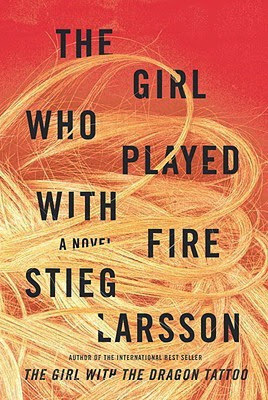 The Girl Who Played with Fire (Millennium, # 2)

*Note: The above links to are affiliate links. Affiliate links support giveaways for Somewhere Only We Know readers.

Goodreads description--The girl with the dragon tattoo is back. Stieg Larsson's seething heroine, Lisbeth Salander, once again finds herself paired with journalist Mikael Blomkvist on the trail of a sinister criminal enterprise. Only this time, Lisbeth must return to the darkness of her own past (more specifically, an event coldly known as "All the Evil") if she is to stay one step ahead--and alive. The Girl Who Played with Fire is a break-out-in-a-cold-sweat thriller that crackles with stunning twists and dismisses any talk of a sophomore slump. Fans of Larsson's prior work will find even more to love here, and readers who do not find their hearts racing within the first five pages may want to confirm they still have a pulse. Expect healthy doses of murder, betrayal, and deceit, as well as enough espresso drinks to fuel downtown Seattle for months. --Dave Callanan

I completely agree with Paula and Tonya (my SNL). The Girl Who Played with Fire didn’t exactly have an enjoyable beginning for me. I’ve discussed before here about how I’m straight and a Christian and therefore do not enjoy GLTB literature, and so Lisbeth’s relationship with Miriam Wu no matter how brief wasn’t really one that I enjoyed reading about listening to—especially considering how things were left between Lisbeth and Blomkvist at the end of The Girl with the Dragon Tattoo. However, I will say that The Girl Who Played With Fire wasn't as difficult to get into for me as The Girl With the Dragon Tattoo. The Girl With the Dragon Tattoo took about 150 pages for me to get hooked. This one didn't take near that long.

While The Girl with the Dragon Tattoo was more about Blomkvist and by extension Lisbeth helping him out of his legal troubles, The Girl Who Played with Fire has done a flip-flop and Blomkvist is helping Lisbeth out of her legal troubles while focusing mostly on Lisbeth and her history. After the events of The Girl with the Dragon Tattoo, Lisbeth has run off to do some travelling and completely left without a word to any of her friends—which we find out she doesn’t really believe she has very many of in the first place. Blomkvist doesn’t know where she is or why she left without a word, and neither does Armansky, who she used to work for at Milton Security.

Salander gets herself accused of murder due to her fingerprints being found on the murder weapon used against Dag Svensson and Mia Johansson. And she's also connected to the murder of Nils Bjurman through the Guardianship Agency. On the surface she is the only link between all three murders. But even though Salander thinks she has few friends, we come to see how many friends she actually does have and how many of them are willing to stick their necks out for her in order to prove her innocence.

Truthfully, I loved learning more about Lisbeth, her background, and how she thinks. She's brilliant. We learned that she has a photographic memory in The Girl With the Dragon Tattoo, but we also learn that Lisbeth likes to do crazy complicated math equations and theories for fun. Pretty much any kind of puzzle she enjoys solving. We learn about the events of the past that have scarred her. And I remember the description of The Girl With the Dragon Tattoo saying "there is at least one constant: you really don't want to mess with the girl with the dragon tattoo." While I know Lisbeth showed that part of herself some in The Girl with the Dragon Tattoo, that was amplified by like 200 in The Girl Who Played with Fire. I, for one, would definitely not want to go up against her for any reason, in any area.

I love that despite not having heard from Lisbeth in over a year, Mikael doesn't hesitate to defend her against the allegations she's charged with and he doesn't hesitate to begin his own investigation into the murders in order to get Salander off the hook. She really couldn't ask for more from him.

"There were not so many physical threats that could not be countered with a decent hammer, Salander thought."

Email ThisBlogThis!Share to TwitterShare to FacebookShare to Pinterest
Labels: 3.5 Stars, Audiobook, Crime, Millennium, Mystery, Stieg Larsson, The Girl Who Played With Fire, The Girl with the Dragon Tattoo, Thriller