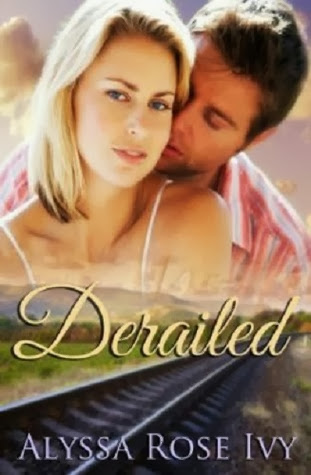 I picked up Derailed because I've seen Alyssa Rose Ivy around and haven't read any of her stuff before. I snagged Derailed as a kindle freebie of the day. Once starting Derailed, I was slightly frustrated because it seemed like this book was following the pattern of typical NA. While this genre frustrates me with it's repetitiveness, I keep getting sucked back in. The main thing I liked about Derailed was that even though it did feel very similar to other NA novels I've read, Ben wasn't the typical leading male. YAY!

Molly broken up with Ben the summer between high school and college, but Ben's still in love with her. Ben doesn't hide his feelings for Molly. He openly seeks her out almost immediately upon her return. I like when characters don't dance around their feelings and attractions for one another. While Molly took a little more persuasion to get on board with Ben, she didn't fight it as much as I feared.

Sometimes consistency is a deal-breaker for me. One would think that dealing with the death of her fiancé, Molly would struggle more with his death as it relates to her going on with her life without him in her life. But Molly wasn't exactly planning to break up with Adam, yet she wasn't sure about marrying him either. So I loved that Alyssa Rose Ivy stood true to Molly's emotion.

However, the biggest frustration I had with Derailed was Molly's emotional state of mind. Yep, that's right. I said it. While I can understand that her feelings and emotions are probably very realistic and I'd never want to minimize what someone else has gone through, I've seen this portrayal of the emotional process so many times over, especially in NA, that I wasn't feeling very tolerant of this aspect.

I will say that for NA this book was fairly tame and one of the least graphically descriptive--which I appreciate. This is another book that I would recommend this one to readers a little shy of this genre. While Derailed frustrated me a little, I still enjoyed the overall story. It was a quick and easy read for me. And I think fans of this genre will enjoy it. And I'm looking forward to checking out the other Clayton Falls books.

Derailed gets 3.5 Stars from me. Have you read Derailed? If so, what did you think? Let me know!