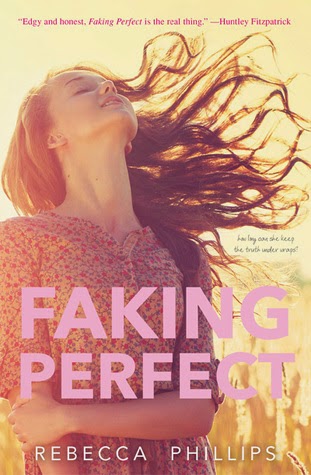 1. Avoid her at school.
2. Keep his mouth shut about what they do together.
3. Never tease her about her friend (and unrequited crush) Ben.

Because with his integrity and values and golden boy looks, Ben can never find out about what she’s been doing behind closed doors with Tyler. Or that her mom’s too busy drinking and chasing losers to pay the bills. Or that Lexi’s dad hasn’t been a part of her life for the last thirteen years. But with Tyler suddenly breaking the rules, Ben asking her out, and her dad back in the picture, how long will she be able to go on faking perfect?

Do you guys ever read a book description and think “this might be good, but it might not be so good”? That’s kind of how I felt when I requested Faking Perfect for review. However, somewhere along the way between the time I originally read the book description and the time I actually picked up Faking Perfect to read, I got some things mixed up in what I thought this book was supposed to be about. Whoops. But hey, it happens, right? With as many books as I read and even more book descriptions trying to determine which ones to add to the TBR pile and which ones to take a pass on, I’m bound to get a few mixed up here and there. All of that just means that Faking Perfect wasn’t quite what I expected it to be.

I’m torn on several aspects of Faking Perfect. This is one of those stories where what’s wrong and how it should be fixed is glaringly obvious. Let me start with some background. Lexi’s father, Eric, was heavily into drugs when she was young. Her mother grabbed Lexi and ran when things hit rock bottom for Eric. Her mother told Lexi growing up that her father was likely dead from a drug overdose. And so Lexi grows up knowing essentially nothing about her father. Her mother isn’t much of a mother. Despite running from Eric because of his addiction, Lexi’s mother turns to alcohol and men. Thankfully, Lexi’s mother’s high school best friend lives across the street from them and has been a strong motherly figure in Lexi’s life. So to say that Lexi has issues is a bit of an understatement. Lexi’s found herself a part of the popular clique, but she still feels like an outsider. Apparently the popular clique in her school has some really high standards academically, in appearance, and morally. And Lexi knows that if they knew her dirty secrets—her mother’s alcohol and revolving men, her father’s drug addiction, and her own personal addiction to bad boy Tyler—they would want nothing to do with her. And so…Lexi decides to put up a front around her “friends.” Add to that the fact that Lexi has a crush on the ringleader of the popular group, Ben, who happens to be the most judgmental of all. So…do the issues and fixes shout obvious to you from just this paragraph?

Obviously, faking who you are is not something that anyone can maintain forever. And why anyone would want to be friends with people who they know wouldn’t accept them for who they are and things that are beyond their control is beyond me. Much less have a desire to date someone under those circumstances. This was just beyond obvious. Lexi actually has one true friend that she can be herself in front of, but she even chooses to keep secrets from him as well. While this was a frustration, I honestly didn’t dwell on it because even the book description hinted about this. (*Side note: I’m so excited to read a boy/girl friendship with zero attraction to each other and neither character turning out to be gay.)

Another small frustration of mine was that Lexi didn’t seem to know or at least didn’t explain to the reader what about Ben she liked and crushed on for years. She did find a few things to comment on once the two got together. Although the reasons to dislike Ben were more than obvious. But the same goes for Tyler. Obviously, Lexi claims to have been drawn to the bad boy and there’s definitely this physical attraction that’s there and doesn’t have to be explained, but why Tyler began to develop feelings for Lexi…all of that wasn’t as obvious as I would have liked.

Truthfully, the part of the story that got to me the most was centered around Lexi’s relationship with her parents. I’m transitioning from always viewing the child’s perspective to also viewing the parent’s perspective as well. And well both sides were pretty emotional for me in Faking Perfect. I mean the conflict and even some of the “surprises” were again…obvious. But I really felt some true emotion. Granted, I’m more emotional these days…so it’s possible that I wouldn’t have reacted as strongly were I not pregnant while reading this book.

-I wondered how it was possible that he could disgust me and turn me on, all at the same time.

-There were two sides to everything and everyone, and somewhere in the middle was the truth.

You can tell even from the description that Lexi and Tyler have a sexual relationship so that shouldn’t be a surprise. While that was prevalent throughout the story, the book wasn’t descriptive with any of those moments. And if I remember correctly, Faking Perfect did have cursing but not too terribly much of it.

In the end, Faking Perfect had some issues. Most of the issues were obvious even from the book description. While I noted them and had to discuss them here in my review, I didn’t really find myself too annoyed with the book because of them. Yet at the same time, I found myself getting teary-eyed as well. So Faking Perfect definitely made me feel something, which is pivotal for my reading experiences. Faking Perfect gets 4 Stars. Have you read Faking Perfect? What did you think? Let me know!