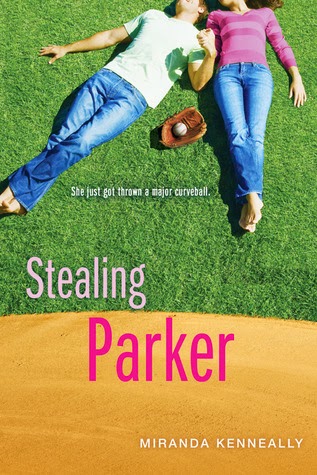 Goodreads description--Red-hot author Miranda Kenneally hits one out of the park in this return to Catching Jordan's Hundred Oaks High.

Parker Shelton pretty much has the perfect life. She’s on her way to becoming valedictorian at Hundred Oaks High, she’s made the all-star softball team, and she has plenty of friends. Then her mother’s scandal rocks their small town and suddenly no one will talk to her.

So she quits softball. Drops twenty pounds. And she figures why kiss one guy when she can kiss three? Or four. Why limit herself to high school boys when the majorly cute new baseball coach seems especially flirty?

But how far is too far before she loses herself completely?

So I have no idea where my original review went for this book. I know I typed it because I remember some specific things that I said about it. However, when I went to go prep this blog post, I couldn’t find it anywhere! UGH! That’s so annoying. Especially because this is a book that I had a lot to say about…or at least, I had a lot of feelings about. But just to be frank and upfront…this was not a book I enjoyed so I’m not looking forward to reviewing it again. That being said…this probably won’t be as long or as thought out as my original review. It might be a little nicer (but probably not).

First of all, this isn’t mentioned in the description so it might be considered as a spoiler, but I wish I’d known about it before picking up this book. Parker’s mom’s big secret…she “announced she’s a lesbian and ran off with her friend who was more than just a friend.” Parker is understandably hurt by her mother’s decision. Sexual orientation and preferences aside, 9.9 children out of 10 that have experienced a divorce will tell you that this severely impacted them emotionally. Add to that the other and you’ve got an emotionally screwed up Parker.

Parker’s family attended church and because of her mother’s decision Parker faces a lot of judgmental people. Her mother and father’s former friends now talk about them behind their backs, they turn their noses up, and they tell their children not to play with Parker because the lesbianism might rub off. (I’m exaggerating here, but only slightly.) That being said, Parker turns her nose up at the church. She still goes because her father makes her, but she’s not really interested anymore and even at one point blames God for her mother’s decisions. (“Why did God let this happen to me?” and then later “I don’t see how a loving God would split a family up like he did mine.”) The only person who’s stuck by her side has been her best friend Drew who she secretly wonders if he’s gay too. (Can you guys feel the amount of sarcasm I’m trying to hold back?) This hits on three of my biggest pet peeves in YA literature these days. 1) these types of Christian characters, 2) the best friends of the opposite sex can only be best friends if a, they’re in love with each other or b, one of them is gay, and 3) just gay characters in general being forced down out throats in another book about "acceptance". Tired. Overplayed. Worn out. Used up. Get a better storyline.

So not only does Parker respond to her mother’s behavior by rejecting religion, but she also decides that she has to do everything she can to prove that she’s not a lesbian like her mother. This leads her into dangerous territory with the opposite sex. She hooks up. A lot. She doesn’t move past making out, but her reputation is beginning to grow that she’s “easy.” She doesn’t see the harm. Besides she loves flirting and hooking up and making out. So much so that she doesn’t even blink her eyes at going after the new assistant baseball coach. He’s young for a coach/teacher, but he’s still a teacher nonetheless. If this freaks you out, it should. While I have no issues with age gaps necessarily (my husband’s 12 years older than me), the idea of my daughter hooking up with a teacher is not cool…at all.

My issues don’t stop there. While the idea of my teenage daughter having any sort of relationship with a teacher/coach at her school freaks me out, there’s something else that bothers me about their relationship. Parker and Bryan start off having a really good dynamic where their entire relationship is built around conversation. They have several things in common and so it’s easy to see how there could be an attraction there. However, once things crossed any kind of physical boundary it’s like all conversation went out the window. I guess this is possible. But it just felt weird to me that they had such a verbal relationship in the beginning only to swap to a relationship where no talking was really involved. It didn’t feel consistent to me. Despite that, I didn’t want these two together anyway, so I was okay with how things ultimately ended up as far as they’re concerned.

Another thing that bothered me is Parker’s relationship with her mom. In the beginning of the book, Parker wants nothing to do with her mom. This isn’t because she feels betrayed by her mom “choosing someone else over her family” so much as it is because Parker doesn’t want her own friends to think that she’s gay. So she avoids her mom totally because of this. For one, I think that Parker would be extremely hurt and betrayed by her mother’s actions regardless of who she left her family for. Yet at some point, she "just needs her mom" and all of a sudden everything’s forgiven. I found that hard to believe too. It takes years to work through the kind of pain and trauma that’s caused by a parent suddenly leaving the family. Some children never really recover from those hurts. This isn’t a pain easily recovered from.

And then we get into the overall message of the book which was “do whatever makes you feel good/happy.” You guys, this message is the biggest load of crock I’ve ever heard. Do what makes you feel good? Some people see possessions that they do not own and think to themselves “you know, it would really make me happy to have that,” or “I’ll finally feel good about myself when that’s mine.” Yet they don’t have the means or the money to just buy it. And what do they do? They go out and just take it. Some people find that it makes them feel insanely good by torturing other people and chopping their bodies into tiny pieces. I know that’s an extreme, but where do you draw the line? How do you make a distinction between doing what makes you feel good and when you’ve crossed the line into “wrong”? There has to be some standard of measurement. You can’t just make it up. Not that those who take this stance care much about what the Bible says, but Jeremiah 17:9 says “The heart is deceitful above all things…” Sure as long as it makes you happy, bail on your family, your word, your kids, your promises, your spouse… whatever works best for you. Problem is...often times what we want or what would make us happy also hurts others. Does that make it okay? What feels good to you hurts me. But just so long as you feel good. Whatever. Moving on.

The only (and I do mean only) redeeming quality that I enjoyed about this book was Parker’s transition into finding the guy who is the best fit for her. Often times, people end up with spouses/significant others who are not a good fit for them. And often times those people are even aware of that, but they stay because they’re comfortable. They might not be happy, but at least they know what to expect. Yet Parker does evaluate the two options before her and has to make a decision about which one is right for her. I think she made the right choice in the end.

All in all, I just didn’t like it…period. I will look back on Stealing Parker with nothing but bitterness, annoyance, frustration, and even anger. While I’ve enjoyed Miranda Kenneally before and this book didn’t completely turn me off her other work, I did not enjoy this book. At all. 1 Star from me for Stealing Parker (a first ever). Have you read Stealing Parker? What did you think? Let me know!