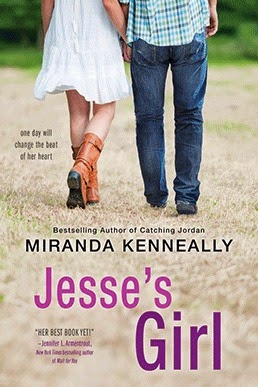 Everyone at Hundred Oaks High knows that career mentoring day is a joke. So when Maya Henry said she wanted to be a rock star, she never imagined she’d get to shadow *the* Jesse Scott, Nashville’s teen idol.

But spending the day with Jesse is far from a dream come true. He’s as gorgeous as his music, but seeing all that he’s accomplished is just a reminder of everything Maya’s lost: her trust, her boyfriend, their band, and any chance to play the music she craves. Not to mention that Jesse’s pushy and opinionated. He made it on his own, and he thinks Maya’s playing back up to other people’s dreams. Does she have what it takes to follow her heart—and go solo?

I finished All the Rage by Courtney Summers the same day that I started (and finished) Jesse’s Girl. After All the Rage, I needed something much lighter. Jesse’s Girl fit that perfectly.

Jesse won a national TV show called Wannabe Rocker (reminiscent of American Idol/X Factor/The Voice), and his career took off from there. While Jesse’s still has an absolutely passion for music, for writing, and for performing, he’s become jaded by the fame. Everyone he meets wants something. Girls want to date him, sleep with him, or really just be seen with him. People who laughed at him in high school now want to borrow money or want him to get them a record deal of their own. He has no real interested in meeting anyone new—especially someone else who might want something from him.

But Maya isn’t anything Jesse expects or assumes her to be. Maya doesn’t even like country music (which is what Jesse sings), but she can appreciate his talent, voice, and experience. Plus he’s not so bad on the eyes. Maya’s also an extremely talented guitar player and a mediocre singer with potential to be really good. She wants to enter her band into the next season of Wannabe Rocker, but what she doesn’t expect is to get kicked out the band that she put together. Maya’s biggest fear is going solo. She always croaks (literally and metaphorically) when all of the attention is on her.

Once Jesse realizes that Maya actually does have her own talent and she’s not seeking anything from him but an opportunity to learn, he softens toward her and they end up spending an incredible day together that neither one of them want to end. I liked that the majority of the book took place within one day, yet this wasn’t a story about two people who fall in love in one day. They experience an awesome day together and what that means is that they realize they want to do so more. Yet Maya and Jesse both have some baggage. Jesse still worries that Maya might be using him to further her dreams. And Maya worries that Jesse’s going to move on as soon as he finds someone better.

Miranda Kenneally’s writing style is smooth and sucks me in quickly. While there is some language, I’m always impressed that she limits this. And the same with sexual situations. Her characters do find themselves in situations, but she never really dwells on that or gets too descriptive. I will say that I was rolling my eyes with Dave, Maya’s best friend. As I’ve established, it doesn’t seem like there are any boy/girl friendships anymore that don’t include one party being gay.

-It sucks to have a once-in-a-lifetime day, a day that changes you, only to hear the same old song repeated on the radio over and over. I don’t want yesterday to wither away and die.

-“So basically the band that I started said they’ll take me back because they don’t want to lose you?”

-I feel like I played the lottery and won. And then all the money got stolen.

I’ve totally gone about this series out of whack. I read Breathe, Annie, Breathe (book 5) first. Which as far as I can tell has no connection to any of the other books….but I could be missing something. Then Catching Jordan (book 1). And now Jesse’s Girl (book 6). And I was so glad that I did read Catching Jordan before Jesse’s Girl because there were crossovers here. As a matter of fact, Maya is Sam’s younger sister. At the time of this posting, I have also read Stealing Parker (book 2) and Things I Can't Forget (book 3, which I haven't review yet) and I didn't enjoy either of those two near as much as the three I've read before them.

Jesse’s Girl was just what I needed. It was light and fun and quick. I started and finished it in less than 24 hours. The characters were lively and yet still flawed. I loved how there really were very few and insignificant moments of stupidity for the characters. Jesse’s Girl gets 4 Stars from me. Have you read Jesse’s Girl? What did you think? Let me know!