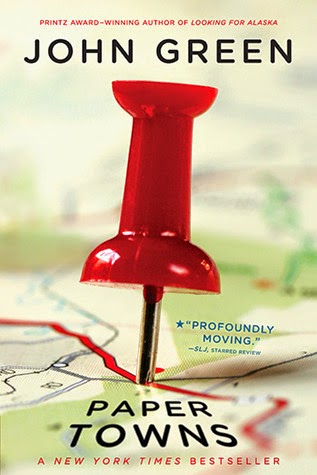 Goodreads description--Who is the real Margo?

Quentin Jacobsen has spent a lifetime loving the magnificently adventurous Margo Roth Spiegelman from afar. So when she cracks open a window and climbs into his life—dressed like a ninja and summoning him for an ingenious campaign of revenge—he follows. After their all-nighter ends, and a new day breaks, Q arrives at school to discover that Margo, always an enigma, has now become a mystery. But Q soon learns that there are clues—and they're for him. Urged down a disconnected path, the closer he gets, the less Q sees the girl he thought he knew...

Sometimes when I read a book I know exactly what I want to say about it. And then there are other times when I finish a book and I have a hard time deciding what to say. Paper Towns is one of those books that I don’t know what or how much to say.

Quentin and Margo grew up living next door to each other. They played together when they were younger, but as happens, they grew apart as they got older. They have different friends and travel in different circles at school. But Quentin’s always watched Margo from afar. And he’s had a crush on her since they were little. So what the description doesn’t say, but I don’t think is a spoiler is that after Margo drags Quentin out for a night of pranks and revenge, she disappears. This isn’t the first time she’s run away so her parents don’t seem all that concerned. But Quentin follows the clues that Margo left for him determined to find her and show her that he gets her even if she’s different from the way he always imagined her to be.

Quentin was solely absorbed with his task of finding Margo. He recruits his two best friends and even one of Margo’s friends to join in the hunt and help him figure out the clues, but no one is as obsessed about this mission as Quentin is. I imagine it would be difficult to look the other way when the clues Margo left are so perfectly geared to Quentin, so I understand why he took on this quest. Quentin was a typical teenage boy without being annoying. He didn’t solely focus his thoughts on sex like most teenage boys. And I appreciated that he wasn’t really much of a partier. I liked him. I connected to him.

Margo…well…I struggled with connecting to her completely. She’s absent for the majority of the book, but in the beginning during the night of revenge and pranks, I couldn’t fully connect with her, and in the end I found that I didn’t really like her very much at all. Quentin realizes how little of the real Margo anyone has seen and while I think there’s a more philosophical depth to this idea (that no one can ever fully be known by another), Margo chose not to reveal herself to those around her. If she found herself alone or annoyed with those around her then this was a bed of her own making. Ultimately, she was a bit of a brat.

The side characters were pretty flushed out. Ben was supposed to be the humorous one, but I guess I didn’t connect to his sense of humor as much as I would have liked. He used the word “honeybunny” entirely too much. Although thankfully, once he received any real female attention I don’t think the word appeared again. Radar is the more nerdy of the group. He’s all internet focused, and he really felt the most solid of the group of boys. I do wish we had gotten to see more of Angela as I think she might have added to the story. And then Lacey wasn’t as anyone expected her to be which I loved. Whereas Margo didn’t end up being as enjoyable of a characters as I would have liked, Lacey on the other hand was a nice surprise.

The story itself was a bit slow for me. Whereas The Fault in Our Stars had me hooked and laughing out loud by page 19, I was more than 40% into Paper Towns before I felt invested. And even after that point, the story seemed to progress a little on the slow side for me. John Green’s writing was still good—smooth, flowing, and well thought out. But I think overall I wasn’t blown away. I wouldn’t really call Paper Towns a coming of age story, but it had a similar vibe. I guess this is one of those “it’s all about the journey” stories.

-“MAMA! DAD! ROBBERY ROBBERY!” I wanted to say, The only thing we stole was your eyebrow…

-“I didn’t need you, you idiot. I picked you. And then you picked me back. … And that’s like a promise. At least for tonight. In sickness and in health. In good times and in bad. For richer, for poorer. Till dawn do us part.”

-“I think Chuck Parson had a textbook strapped to his stomach.” “Those are called abs,” I told him. “Oh, yeah. I’ve heard of those.”

-“As far as I can tell, there are two basic rules: 1. Don’t bite anything without permission, and 2. The human tongue is like wasabi: it’s very powerful, and should be used sparingly.”

-“Nothing ever happens like you imagine it will,” she says.

-“…you have to be careful which metaphor you choose, because it matters.”

Paper Towns was good, but I wasn’t blown away in that way I was with The Fault in Our Stars. I didn’t connect to Margo or the story as much as I would have liked. I feel like the philosophy behind this one might have overshadowed the story a bit. Yet, the writing was still good. So how do I rate Paper Towns if I liked the writing but not really the story itself. I don’t know. 3.5-4 Stars….somewhere in there. Have you read Paper Towns? What did you think? Let me know!