The Summer of Chasing Mermaids - Review 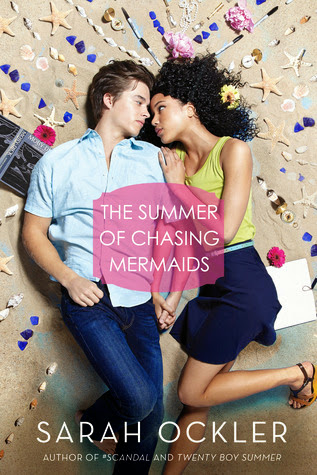 The Summer of Chasing Mermaids

Goodreads description--Sometimes, there are no words…

The youngest of six talented sisters, Elyse d’Abreau was destined for stardom—until a boating accident took everything from her. Now, the most beautiful singer in Tobago can’t sing. She can’t even speak.

Seeking quiet solitude, Elyse accepts a friend’s invitation to Atargatis Cove. Named for the mythical first mermaid, the Oregon seaside town is everything Elyse’s home in the Caribbean isn’t: An ocean too cold for swimming, parties too tame for singing, and people too polite to pry—except for one.

Christian Kane is a notorious playboy—insolent, arrogant, and completely charming. He’s also the only person in Atargatis Cove who doesn’t treat Elyse like a glass statue. He challenges her to express herself, and he admires the way she treats his younger brother Sebastian, who believes Elyse is the legendary mermaid come to life.

When Christian needs a first mate for the Cove’s high-stakes Pirate Regatta, Elyse reluctantly stows her fear of the sea and climbs aboard. The ocean isn’t the only thing making waves, though—swept up in Christian’s seductive tide and entranced by the Cove’s charms, Elyse begins to wonder if a life of solitude isn’t what she needs. But changing course again means facing her past. It means finding her inner voice. And scariest of all, it means opening her heart to a boy who’s best known for breaking them . . .

The Summer of Chasing Mermaids was my first experience of Sarah Ockler’s work. I’ve seen others rave about her, and I have a couple of her other books on my TBR list. When I initially saw “mermaids” in the title I thought that there was no way that this book could be for me. I’ve read multiple mermaid books in an attempt to find one that works for me, but I’ve yet to find one that I’ve REALLLY enjoyed. But when I looked at the description it doesn’t indicate that the book is about actual mermaids at all. And well…it’s not. Kind of. Not in the most obvious way anyway.

So yeah, here’s the lowdown. Elyse is injured in a boating accident. You don’t know the details of which until the end of the book. This is actually Elyse’s 2nd life-or-death experience with the sea. And even though the sea is in her blood, she’s become fearful of it as well. Again, we don’t know the details, but Elyse hints that the accident and her injuries were caused by someone she loves most—her twin sister, Natalie. Elyse and Natalie were a singing duet headed for stardom. But the accident leaves Elyse unable to speak and unable to sing. Elyse’s aunt and cousin invite her to Oregon to kind of just get away for a while. She’s feeling a lot of emotions due to her accident, and she just needed some time away from home. In the meantime, she joins a group friends and finds that she can have other dreams. She can even fall in love.

Sounds all good, right? Well…I’ve got a few issues—technical and personal—that I have to address. The first is an easy thing really. I don’t like when one character has a thought to themselves and another character basically says that same thought out loud in an almost word-for-word way or using terms that are too unique to find it believable that these two characters just happened to have had the exact same thought. When this happens one time (references to “the green-eyed monster" aka jealousy), then I chalk it up to coincidence. Sure this can happen in real life occasionally. But when it happens more than that, I start to get annoyed. It feels a bit lazy to me and not a mature writing technique. This is personal pet peeve of mine when it comes to books.

The second technical thing I took issue with was…how do I describe this? I know that the written word is supposed to be more formal than the spoken word. We should TRY to write better than we speak, but often times we write EXACTLY like we speak—especially when we’re writing informally. Elyse uses written word for a large portion of her communication throughout this book as she can no longer speak. When Elyse finally has the flashback to the accident that caused her injuries, Elyse all of a sudden has a T&T dialect. Let me give you an example: “We ain’t forgetting. You coming too. You could carry the suitcases.” and “You call Mami Wata from the deep with that crazy noise.” But what bothers me about this is that is feels so sudden. Elyse doesn’t write this way in her communications with others.

Since I’m on the subject of Elyse’s communication, I realize that the whole “moral of the story” kind of thing was about Elyse finding her “voice” while still not being able to speak. This was basically the entire point of the story. But I was really annoyed with Elyse when it came to this. It’s as if not being able to speak physically made her think that she had no way of communication. Sure she mouths words and she often would write things down, but if you can’t speak, especially if you’re normally not the sit back and be quiet kind of person, I have a hard time believing that you stop trying to communicate during the times when you have the most to say. I don’t say that from someone who’s normally loud and opinionated—well opinionated I may be, but I do tend to sit back and observe more than speak. But yet time and time again, Elyse uses her inability to speak as a means of not “saying” anything. There are other forms of communication. Writing sure! But what about sign language? It’s been four months since her accident and she hasn’t even attempted to learn sign language in any form. Aside from that, how many people do you know that are good at reading lips? Even when people enunciate slowly, I get lost. I just struggled with this. Yes, again, the point of the book was Elyse learning how to find her “voice” without her voice. But still. This was just something that wasn’t exactly enjoyable throughout the reading experience.

Now let’s talk about Sebastian. He’s six (and a half) years old. He’s a sweet kid. I really liked his character. He has a fascination with mermaids, right? This is really where the title of the book comes in. The town is named after a legend surrounding a mermaid, and Sebastian’s been set on finding her. So he goes searching and chasing after mermaids. Christian—his brother—supports him and uses this as a way to spend time with him. And Elyse bonds with him over this too. She gets her grandmother to send her fairytale books from home about mermaids. That’s all well and good, right? Sure.

What bothered me about Sebastain was the authors’ agenda here. Because Sebastian is interested in mermaids, this is twisted into something so much more than it needs to be. “Little boys aren’t supposed to be interested in mermaids”, even though there are also “mermen” in legends as well. Though that term is never used in this book. The adult men in this book of course look down on Sebastian’s interest in such a feminine thing. And so because Sebastain is interested in something with a more feminine feel to it, this is turned into LGBT propaganda. He’s fascinated in mermaids so he must be “gay” right? Or be showing gay tendencies? Or how about this…because he’s interested in mermaids and there’s a mermaid parade, he just HAS to be a part of this parade. So that automatically means we need to dress him like a girl and put him in a skirt and sequins and put makeup on him and braid his hair. And then he feels beautiful. Right? That’s the logical jump. He couldn’t have possibly been dressed as a “merman” instead of a “mermaid?” Well then he wouldn’t have blended in and been able to sneak past the authority figures, sure…but why did this have to turn into Sebastian dressing like a girl? What part of six year old transvestite sounded like a good idea?

But beyond that, we’re told that Sebastian is “embracing and showcasing his personal truth!” HE’S SIX YEARS OLD!!!!! I didn’t know my personal truth until I was in my twenties. I’ve got nieces and nephews hitting their teenage years. Believe me when I tell you, THEY DON’T KNOW THEIR PERSONAL TRUTH! How did a six year old kid who has an interest in mermaids jump to being in the wrong gender or wanting to dress like a female? And I’m not exaggerating here. Elyse calls Sebastian “her mermaid queen”. QUEEN=FEMALE. MERMAID=FEMALE. There are male equivalents—merman, king. But no. This wasn’t about equality. It wasn’t about Sebastian being allowed to have an interest in something “feminine” and therefore enjoying the masculine expression of that, this book was turned into a political agenda that says that six year olds are enlightened enough to “know their own personal truths.”

I’m sorry guys. I know I often fall into the minority when it comes to my thoughts and opinions. But I can’t just let this one go. This book had an agenda. While I loved Sebastian as a character, I feel like the author and the adults in this story twisted him into so much more than a boy with a unique interest.

The writing itself was good—often poetic, and designed to be that way.

Christian was likable. I wish we’d gotten more of a declaration or more clarification of his feelings for Elyse. And I wish we knew what happened after that summer was over. But that’s okay. Ultimately the story wasn’t about him.

The aspects I liked about this book just couldn’t overcome the issues I had with it as well. The first few issues wouldn’t have been as big of a deal, but once I got to the agenda being pushed throughout this book, I basically shut down. Even though I liked Sebastian’s character, I was BEYOND annoyed with the biased agenda that Sarah Ockler decided to pursue through his character. I can’t support this book, and likely won’t be reading any other books by this author either. The Summer of Chasing Mermaids is one that I’m likely in the minority on, but I can’t give it more than 2 Stars. Have you read The Summer of Chasing Mermaids? What did you think? Let me know!