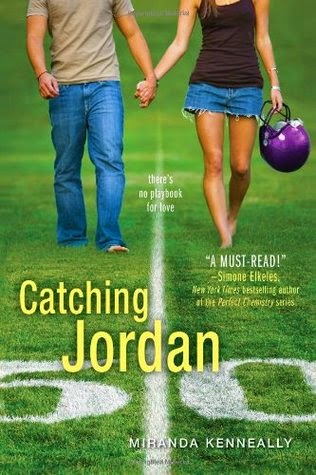 Goodreads description--What girl doesn't want to be surrounded by gorgeous jocks day in and day out? Jordan Woods isn't just surrounded by hot guys, though-she leads them as the captain and quarterback of her high school football team. They all see her as one of the guys, and that's just fine. As long as she gets her athletic scholarship to a powerhouse university. But now there's a new guy in town who threatens her starting position... suddenly she's hoping he'll see her as more than just a teammate.

I read Breathe, Annie, Breathe earlier this year and thoroughly enjoyed it. At the time I requested it, I didn’t realize that it was part of a series. Granted, each of the books in this series can be read as standalones. That was certainly true of Breathe, Annie, Breathe. But reading that book made me realize that I definitely want to read the other books in this series as well. One day I was browsing the e-library for potential audiobooks that might be available immediately, but instead what I found was Catching Jordan, and I jumped on it.

The description above gives a good bit of information even though it’s pretty brief. But here's the deal. Jordan is the captain and quarterback of her high school football team. She loves football. Her father happens to be an NFL quarterback, and her brother is a college quarterback as well. It is her dream to play college level football for the University of Alabama. Being on the football team does have her surrounded by jocks all day, but she loves those jocks. They’re her family. Her brothers. Her best friends. The guys closest to her are her best friend, Sam Henry, and two other players, JJ and Carter. She’s always been just one of the guys even though she’s really not.

When Ty Green shows up at practice one day, Jordan is thrown all off her game. For one, he’s hot. He’s not the first guy that she’s ever found really attractive, but he is the first guy that’s given her butterflies. But then come to find out, Ty is also a quarterback—an extremely good quarterback. He had to move from Texas to Tennessee after his father died and his mother was paralyzed in a car accident. He, his sister, and his mother move in with his paternal grandfather. So Ty’s got a lot on his shoulders. He’s not really trying to take Jordan’s position, but he really just loves the game and wants to play whenever he can.

It’s obvious that Ty is interested in Jordan almost as immediately as Jordan is interested in Ty. Ty pursues Jordan, and even though it’s what Jordan wants, she’s pretty much freaked out. She’s never dated anyone before. She’s never kissed anyone. Never made out. Definitely never made it as far as all of her male friends have.

And there’s plenty to distract Jordan from Ty as well. Her father doesn’t support her decision to play football. He’s worried that she’s going to get seriously injured. That’s a feeling that I can understand, but he was totally hypocritically in his application of his concerns when it comes to Jordan and her brother Mike. I know they’re not the same. But that was something that Jordan has to battle. Plus she’s trying to secure a scholarship from her dream school which isn’t really being upfront with her. Personally, I don’t follow college football, but if I did, I’d be an Auburn University fan myself (the arch-rival for the University of Alabama). However, it was still pretty cool for the state to be mentioned so frequently throughout this book. And then there’s something going on with her best friend, Sam Henry. Something’s been up with him since his girlfriend, Carrie, broke up with him. Personally, I really enjoyed the direction that this took the story.

I don’t want to say too much or give anything away, but I really, really enjoyed this one. There were many dynamics at play within Catching Jordan, but I was never confused or overwhelmed with truly how much was going on. It was all executed just right. There is the fact that Jordan is a girl and plays a predominantly male sport. Then Jordan is crushing on the one person who could take her dream away from her. Her father doesn’t support her and their relationship has really struggled as a result. Jordan’s relationship with her mother and brother were great though. Jordan is confronted with her femininity due to her recent romantic life as well as realizing that sometime you just need to talk things out with a friend who’s also a girl. There is a love triangle if those bother you, but in my opinion, it was a triangle done right. Jordan has to figure out how she feels. What’s hormonal and what’s real. She has to figure out what’s superficial and what will last. Jordan has to face the possibility of not getting what she’s dreamed of, but potentially getting something even better.

Personally, I will say that while this book isn’t descriptive during these scenes, Jordan does lose her v-card. This was handled so casually that if anything bothered me, this did. It wasn’t a big deal to her that she went through with something so big with no commitment from the guy and with little thought to how important that moment is/was. And even after the event was over, I feel like there wasn’t enough regret that almost any girl would feel in her situation.

Side note: I did love the way that Jordan writes in a journal. She doesn’t feel like she can talk to her mom or her guy friends about her feelings and she doesn’t have any girl friends that she trusts enough. So she seeks to put her thoughts to paper. If nothing else, to get them out of her head. That’s totally how I ended up journaling through my teenage years as well.

-I love the way his curls flop around
and hang across his forehead.
I love how he never just lets me win.
I have to earn it.
I love how he touches me just because.
I love his loyalty. …

-When unrequited love is the most expensive thing on the menu, sometimes you settle for the daily special.

All in all, I really enjoyed Catching Jordan. It was different from what I was expecting, but it was also exactly what I needed for the mood I’ve been in lately. Catching Jordan gets 4 Stars. Have you read Catching Jordan? What did you think? Let me know!