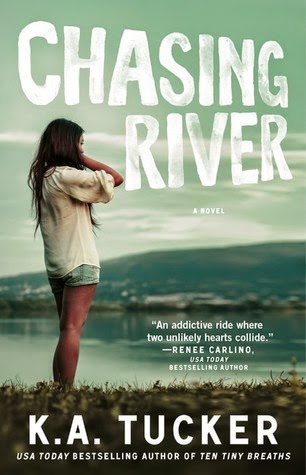 Goodreads description--Armed with two years' worth of savings and the need to experience life outside the bubble of her Oregon small town, twenty-five-year old Amber Welles is prepared for anything. Except dying in Dublin. Had it not been for the bravery of a stranger, she might have. But he takes off before she has the chance to offer her gratitude.

Twenty-four-year-old River Delaney is rattled. No one was supposed to get hurt. But then that American tourist showed up. He couldn't let her die, but he also couldn't risk being identified at the scene—so, he ran. Back to his everyday life of running his family’s pub. Only, everyday life is getting more and more complicated, thanks to his brother, Aengus, and his criminal associations. When the American girl tracks River down, he quickly realizes how much he likes her, how wrong she is for him. And how dangerous it is to have her around. Chasing her off would be the smart move.

And River isn't the kind of guy she'd want to catch.

Chasing River is officially my favorite book of the Burying Water series. Amber is Jesse’s (from Burying Water) twin sister. Where Jesse was always getting in trouble and even sometimes breaking the law, Amber has always been a rules follower. She’s not a step-outside-of-the-lines kind of girl. She’s dated safe guys in the past. She lives in a safe, small town. She works at the same hospital that her mom does—again a relatively safe choice. But when a relationship that she saw leading to forever goes south, Amber decides that she needs to get out of her comfort zone and find out who she really is. She plans this extensive trip travelling to a dozen or so countries and she actually sets out on it.

Chasing River starts with River. I don’t tend to re-read book descriptions right before starting the book and since Water (from Burying Water) and Rain (from Becoming Rain) were both girls, I kind of assumed that River would be a girl. That and there wasn’t anything (at least that I picked up on) in the first chapter until the very end to indicate that River was a boy. Now this bothers me. I really like for the gender of the character narrating to feel obvious almost immediately even if the author doesn’t immediately specify. But that wasn’t the case. Just a slight annoyance.

River works at his family’s bar. And his family is about as complicated as Irish national history. His father and his father’s father and so on used to fight for Irish Catholic freedom against English Protestants. Over time this has gotten twisted into something very different from where it started. His father no longer has anything to do with that, but his older brother has gotten caught up in the worst of the worst. River is just trying to keep the pieces of his family puzzle together. But his brother does something really stupid which starts a spiral of events that River can no longer control. Luckily though, he does keep Amber from being killed or severely wounded in an accident at his brother’s hand.

After a stranger risks his own life to save hers, Amber has to find a way to thank him. But thanking him just turns into this back and forth exchange of meetings and flirtations. It doesn’t take long for feelings to develop between these two. But things aren’t simple either. What happens when the police find out the identity of the man who saved Amber’s life and then left the scene? What happens when River’s brother realizes that River knows the American girl who was at the scene of his crime?

Normally, I’m not a fan of politics in books, but maybe since this wasn’t American politics it didn’t bother me so much. Plus it wasn’t what I would call political even if it did involve Irish national history—something I know nothing about. This part was actually extremely interesting to me. Another bonus was that KA Tucker did the perfect amount of including Irish dialect without overwhelming me as an American reader. I was able to pick up some Irish accent in places, but entire words and phrases weren’t spelled phonetically throughout most of the book. That I appreciate. I got the vibe of an Irish accent without having to get too bogged down with pronunciations.

Without giving any spoilers, I really loved the advice that Amber’s dad gave her. I think it was some real life practical advice. And I’m glad that she made the decision to follow his advice. I feel like she would always have “what ifs” and regrets plaguing her if she hadn’t followed his advice.

I didn’t highlight (anything I don’t think) throughout Chasing River to share as a favorite quote or even moments that I found funny or particularly moving, but that’s okay. I very much appreciate that this book was not extremely graphic. While there were some physical scenes, they were tastefully done and I didn’t feel outside of my comfort zone there. Similarly, things were realistic. The characters weren’t surviving a bomb during day and then staying up all night long the same night. There were boundaries—physical and emotional—that kept this book from being one of those that you have to roll your eyes at because of how improbable that aspect was.