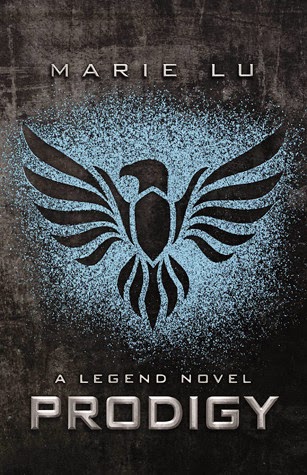 Goodreads description--Injured and on the run, it has been seven days since June and Day barely escaped Los Angeles and the Republic with their lives. Day is believed dead having lost his own brother to an execution squad who thought they were assassinating him. June is now the Republic's most wanted traitor. Desperate for help, they turn to the Patriots - a vigilante rebel group sworn to bring down the Republic. But can they trust them or have they unwittingly become pawns in the most terrifying of political games?

I’m probably the only person who feels this way about this book. Let’s go ahead and get that out of the way up front. Feel free to boo me and all that jazz or whatever. But I have to say that I found myself disappointed with Prodigy. At the end of Legend I pretty much determined what outcome I wanted to see as my happily ever after for this series and these characters. Well, while reading Prodigy I just kept getting increasingly frustrated because it just really looked like my happily ever after had entirely too many things being directed at it to tear it down. I felt like I was watching a trainwreck with no way to stop it. I only knew that I probably wasn’t going to be happy with the outcome. I’ve only done this like one or two other times, but I went out in search of some reviews. I didn’t really want spoilers, but I wanted to know if I should just let myself be apathetic toward the events knowing that I wouldn’t get my happily ever after or if there was actually hope left to hold onto. And well what I found wasn’t exactly hope.

While others really raved about Prodigy because of all the emotions that readers felt while reading this book and that this was a great 2nd book in a series, all I mostly felt was frustration. In the end, I felt like Prodigy followed the same path of most 2nd book in a series have.

Day and June are up against a lot in Prodigy. Day’s still on the search for his brother. Tess has gotten separated from them—I couldn’t remember most of the details about how that went down from Legend. And June’s still reeling from all that she’s learned about the Republic and their involvement in the death of her brother. Once they meet up with the Patriots, Day and June get pulled in their political plans. They’re all trying to serve one purpose but Day’s piece of the puzzle and June’s require them to spend some time apart. During their time apart Day and June are being pulled in different directions. Not to give too much away, but Tess is finally expressing her interest in Day (in the most annoying way possible), and June is being approached by the new head of the Repubilic. Their relationship is put to the test and we aren’t sure where true loyalty lies. Day and Tess have known each other for longer than he’s known June, and is June as cut off from the Republic as Day hopes? Well I’ll never tell. But you can see how they’re being pulled at and tested from all sides.

And this is what I mean by Prodigy following the typical path that other middle books have. Book 1 is usually the setup. You’re giving the information about the world and the characters and relationships start to build. Book 2 is the test of those relationships—time apart, other characters interested in the main two, etc—as well as deepening of the world around them. And then Book 3 is the resolution. The relationships either come through to the other side, or they don’t. And the characters overcome some issue in their world, or they don’t. Prodigy fits in just the same as any other middle book in a trilogy.

A separate and somewhat small gripe is how June realizes that Mateus had feelings for Thomas. I’ve discussed (repeatedly) about how gay characters seem to be forced into many (if not most) YA literature throughout the last few years and this is just one prime example. Mateus is dead. This isn’t a spoiler—he died in Legend. So why was it even necessary to bring this up in Prodigy? His character is dead and gone. And even though we see Thomas in this book, he doesn’t have a big enough role to warrant any discussion of this whatsoever. It didn’t move the story along in any kind of way. It just felt forced.

And then there’s the ending. The ending wasn’t a big surprise for me since I’d gone looking at reviews beforehand. I didn’t read anything that told me what happened, but I expected something big and not exactly happy and well I was right. I can’t say for sure, but I have some small hope that Champion can redeem this ending, but that’s all I’ll say about that.

In the end, I just felt disappointed with Prodigy. It wasn’t “bad,” but it was frustrating. And frustration is about the only emotion I felt throughout the whole book. Even when things were somewhat sad, I just felt slightly annoyed. Mostly I think Prodigy fell into the middle book in a trilogy slump for me. In the end, I’m giving Prodigy 3.5 Stars. Have you read Prodigy? What did you think? Let me know!