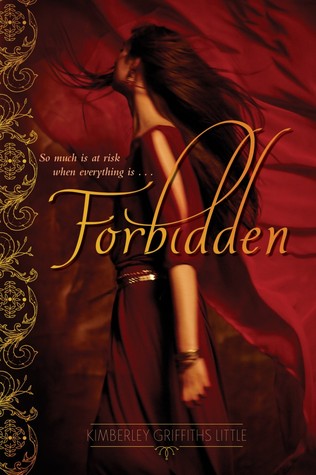 In the unforgiving Mesopotamian desert where Jayden’s tribe lives, betrothal celebrations abound, and tonight it is Jayden’s turn to be honored. But while this union with Horeb, the son of her tribe’s leader, will bring a life of riches and restore her family’s position within the tribe, it will come at the price of Jayden’s heart.

Then a shadowy boy from the Southern Lands appears. Handsome and mysterious, Kadesh fills Jayden’s heart with a passion she never knew possible. But with Horeb’s increasingly violent threats haunting Jayden’s every move, she knows she must find a way to escape—or die trying.

With a forbidden romance blossoming in her heart and her family’s survival on the line, Jayden must embark on a deadly journey to save the ones she loves—and find a true love for herself.

Set against the brilliant backdrop of the sprawling desert, the story of Jayden and Kadesh will leave readers absolutely breathless as they defy the odds and risk it all to be together.

I requested Forbidden shortly after reading The Kiss of Deception by Mary E Pearson. Both books being about arranged marriages, I was hoping that Forbidden would be just as good—even if not exactly similar. And then…reviews started coming in for Forbidden, and I saw that it was getting mixed reviews. I did not read any reviews for it since I planned on reading and reviewing it, but seeing the mixed reception had my excitement for it dropping dramatically. And I hate when that happens. So I put off reading it. I regret that I missed posting my review before publication, but sometimes that happens. All in all, I’m kind of glad that my expectations for Forbidden dropped and that I waited as long to read it as I did. Because I thoroughly enjoyed this one.

I can see where some readers might have had issues though. I will say that Forbidden started out a little slow for me. But by the 20% mark I’m pretty sure that I was interested enough to press on without much outside influence or pep talking. Jayden is about to celebrate her betrothal to her tribe’s future leader, Horeb. The two have grown up together, but Horeb seems to have changed over the years. I wasn’t sure at first if Jayden just didn’t want to get married period or if it was Horeb himself that was causing her apprehension. That was revealed in time for sure and the description above pretty much says it anyway. Jayden and Horeb’s marriage will wait until the tribe travels from their winter lands to the city where they will live out the summer and then back to the winter lands.

The morning the tribe is set to pack up and leave for the city Jayden’s mother goes into labor delaying Jayden’s family from leaving on time. While Jayden’s family is taking care of unplanned needs, an injured stranger stumbles upon them. He and Jayden seem to have a connection almost immediately. Jayden’s family can’t leave the stranger behind because with his injuries and being alone in the dessert with summer coming upon them, he surely will not survive. So Jayden doctors his wounds and he joins their traveling pack. Throughout the journey, Kadesh proves himself useful to Jayden’s father and has time to talk to Jayden one on one as well causing attraction to deepen into affection.

Jayden’s family endures a lot throughout their journey from the dessert to the city. Death, theft, separation, sacrifice, and shifting loyalties all come into play, and I truly felt for Jayden during this time. She’s lost and experienced so much within a short period of time. Plus she’s finally falling in love. But the problem is…it’s with the wrong boy. The boy she’s supposed to marry will secure her family’s future and place within the tribe that she loves so much. But how can she go against her heart? To make matters worse, Jayden’s older sister Leila wants to leave the tribe for a life in the temple of Ashtoreth as a temple priestess (aka prostitute). Leila’s departure from the family and tribe will break the hearts of all she knows and loves. How can she bring herself to do the same thing?

Forbidden had me hooked. I don’t typically enjoy books about Egyptian history or historical fiction, so I wasn’t sure that I would enjoy the dessert setting in Forbidden either but I did. The setting was vivid. I could imagine my toes in the sand, the costumes and jewelry worn by the women of the tribe, and the feel of a camel’s coarse hair. I could imagine the thirst and the relief that comes with finally coming upon a well you need for survival. The setting was nothing that I expected, and everything that I needed it to be. I was invested in Jayden’s emotions even if sometimes I wanted to knock her on the head. And I was rooting for Kadesh, the handsome, wealthy stranger that stole her heart.

But Forbidden had its issues too. For anyone who might have read this book before the sequel was announced and thought this was a standalone, I can see where they wouldn’t have been happy with the overall book. The ending of Forbidden was left wide open for more to come. Now that we know there will be a book 2, Banished, that isn't as much of a big deal. Another slight complaint of mine was that character names seemed to have been taken from history (Abraham, Abimelech, Hammurabi, the Queen of Sheeba). That in combination with places/peoples from history (Edomites, Ammorites, Cannanites, Babylonians etc), I can see where some might wonder if these events are supposed retellings of actual events. I don’t believe these people lived during the same period of time (but I'm also not a history buff) so I didn’t get too caught up in wondering what might be real and what might be fake. I was able to read Forbidden as if it was a complete work of fiction. Even though same aspects felt like they were taken straight from history like the temples of Ashtoreth and Ba’al and the events that took place there.

Around the 70% mark, stupidity did enter the picture. Jayden doesn’t share the information she needs with the proper people at the proper time and that causes distrust. The characters react and behave in a way that causes conflict but didn’t really make sense. This did lesson my overall feelings about the book yet wasn’t enough to cause me to fully dislike the book.

Forbidden was so much more enjoyable than I expected it to be. I’m both sad and glad that I waited so long to read it. I felt what Jayden was feeling. I experienced her loss and heartbreak right along with her. I loved the dessert setting that I’m so unused to reading about. And I thoroughly enjoyed the cultural aspects that are either historically motivated or completely made up by Kimberley Griffiths Little. I was thinking Forbidden would end up with a 4.5 Star rating until the characters lost their ability to make good decisions around the 70% mark. It wasn’t horrible, but it was enough to bump my final rating down to 4 Stars. Have you read Forbidden? What did you think? Let me know!