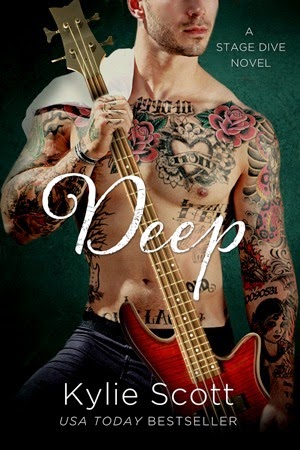 Goodreads description--Don't miss a beat with the fourth and final novel in the USA Today bestselling Stage Dive series from Kylie Scott.

Positive. With two little lines on a pregnancy test, everything in Lizzy Rollins' ordinary life is about to change forever. And all because of one big mistake in Vegas with Ben Nicholson, the irresistibly sexy bass player for Stage Dive. So what if Ben's the only man she's ever met who can make her feel completely safe, cherished, and out of control with desire at the same time? Lizzy knows the gorgeous rock star isn't looking for anything more permanent than a good time, no matter how much she wishes differently.

Ben knows Lizzy is off limits. Completely and utterly. She's his best friend's little sister now, and no matter how hot the chemistry is between them, no matter how sweet and sexy she is, he's not going to go there. But when Ben is forced to keep the one girl he's always had a weakness for out of trouble in Sin City, he quickly learns that what happens in Vegas, doesn't always stay there. Now he and Lizzie are connected in the deepest way possible...but will it lead to a connection of the heart?

I have to admit that I’m a little frustrated and disappointed with Deep. I can’t say I loved Lead, and I’d definitely say that the first two books in the Stage Dive series were the best of the series yet they still had issues. I might not have been as critical about Deep if I’d given more time in between Lead and Deep but that’s just not the case. Both of these books had leading female characters that developed an unrequited insta-lust attraction to the leading male characters. These males have no intentions of being in a relationship and don’t seem the least bit inclined toward these particular females in any specific way. Let me get more specific to Deep only.

Lizzy is Anne’s little sister. I barely remember her being present some in Play, but her interest in Ben was obvious in Lead. Either way, when Deep starts Lizzy is all about some Ben. He’s attractive and she basically goes into stalker, crazy, needy girl mode immediately. Despite the numerous times Ben tries to steer her in another direction she continues to come back for more. More ending up being a night in Las Vegas. Surprised at Ben’s casualness toward their moment together Lizzy tries to move on, but she really doesn’t try too hard. Especially after she finds out that she’s pregnant.

Ben is up front from the very beginning with Lizzy about not wanting a relationship or a commitment and even specifically saying that he can’t date her. Granted his excuses usually revolved around Mal not being happy about it. But still. At some point, I was like “take a hint child!” And of course, Ben is thrown for a loop when he finds out that Lizzy is pregnant. Even then he doesn’t try to pursue a relationship with her. Yet Lizzy continuously gets her hopes up for more.

Deep is the classic story about a needy girl developing an attraction for the player guy. They sleep together one time with no intentions of moving forward and bam needy girl gets pregnant. Player guy freaks and runs for the hills, all the while being pursued by needy girl. Yet in this series player guy does a turn around and becomes “you had me from day one.” Yeah. I don’t buy it. I’m not a huge feminist and I don’t get my panties in a wad over a guy going caveman, but I really did feel like Lizzy was taking our gender back a good 50 years in this book with her behavior. I wanted to jump inside her head and force her to stop being so ridiculous. Aside from the neediness of chasing Ben around, Lizzy also seemed to have no willpower over her body and thought with her physical needs well above her emotional ones which is typically much more common to men than to women. The f-bombs abound and there were more than necessary sexual scenes considering the relationship that these two characters had.

I had no favorite quotes. As a matter of fact, the only highlights I had were for errors—misspellings, missing words, etc. But since I was reading a galley, I don't hold that against the book. I do think I can officially say that Mal is my favorite guy from the series. He’s funny and I actually did enjoy his bits in both Deep and Lead recently. If there was anything I’d want to quote, it probably would have come from Mal.

Deep was my least favorite story in the Stage Dive series. The characters annoyed me. I found a lot of it either unbelievable or what was believable was still annoying as all get out. Deep for me was a bit on the cliché side of things which is always a letdown for me. I understand that writing something completely original is beyond difficult though. Deep gets 2.5 Stars from me. I didn’t hate it. But I didn’t find much that I really enjoyed about it either. Have you read Deep? What did you think? Let me know!