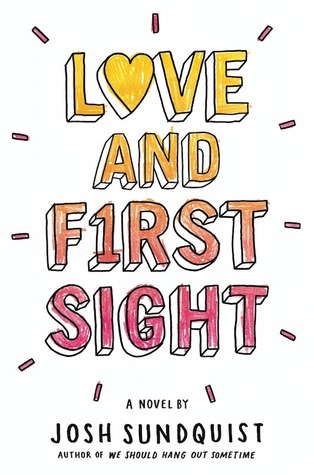 Goodreads description--In his debut novel, YouTube personality and author of We Should Hang Out Sometime Josh Sundquist explores the nature of love, trust, and romantic attraction.

On his first day at a new school, blind sixteen-year-old Will Porter accidentally groped a girl on the stairs, sat on another student in the cafeteria, and somehow drove a classmate to tears. High school can only go up from here, right?

As Will starts to find his footing, he develops a crush on a charming, quiet girl named Cecily. Then an unprecedented opportunity arises: an experimental surgery that could give Will eyesight for the first time in his life. But learning to see is more difficult than Will ever imagined, and he soon discovers that the sighted world has been keeping secrets. It turns out Cecily doesn't meet traditional definitions of beauty--in fact, everything he'd heard about her appearance was a lie engineered by their so-called friends to get the two of them together. Does it matter what Cecily looks like? No, not really. But then why does Will feel so betrayed?

Told with humor and breathtaking poignancy, Love and First Sight is a story about how we related to each other and the world around us.

Will has been blind since birth. After an incident where he was taken advantage of, his parents sent him to a special school for the blind. But now he's decided that he wants to be independent, and Will believes the best way to prove that he can be independent is to go to a normal school. What Will doesn't expect is to find a group of friends that he feel more like family. And maybe even more.

Cecily is first introduced when she runs out of the classroom crying on Will's first day because he was "staring" at her. Only he wasn't staring...because he can't see. But she didn't know that. Will and Cecily end up becoming friends and feelings start to develop. I really enjoyed seeing how Cecily and Will learned to relate to each other. Cecily trying to describe the things that she sees--a painting, a sunrise, etc. She's a photographer so all things visual are especially meaningful for her. And Will trying to explain to Cecily what he can understand and perceive and what he can't.

What neither one of them expects is for an opportunity to arise for Will to have an experimental surgery that might result in him getting his eyesight. This isn't a spoiler because of the title and because of the description, but Will does get his sight. But things that we take for granted daily are things that his eyes and his brain do not recognize. Shapes. Colors. People. He is starting from scratch. Part of this was frustrating for me because I don't always handle books with an excessive amount of description, but I also found myself fascinated because I did just kind of assume that once his eyes were medically fixed then he could just...well...see (and understand). So it was interesting to watch him learn basically the same things that my one year old daughter is learning (shapes and colors, names for objects etc).

Things aren't all blue skies and rainbows for Will and Cecily though. Cecily has been keeping a secret. I was intrigued by this part of the description. What could be the thing Cecily was keeping from Will? Is she "ugly"? Overweight? And what kind of person is Will that it matters to him? Ultimately, I was okay with how Josh Sundquist worked this part of the story. I was never completely surprised by Cecily's secret. And Will's feelings actually turned out to be fairly understandable.

-"Your inability to see doesn't stop your face from speaking what's on your mind."

-"Are your people maybe sensitive to sunlight?" "I think you are getting us confused with vampires."

-"I always expected yellow would be...quieter."

Love and First Sight was a fun read that kept me hooked into the story. I enjoyed the characters (main and secondary). And I was particularly fascinated by Will's journey in gaining his sight. As an added bonus, this book doesn't have any potty mouth which I really appreciated. Love and First Sight gets 4 Stars. Have you read Love and First Sight? What did you think? Let me know!