Discussions Only We Know: Books Change Lives So What Changes Do You Want to Make? 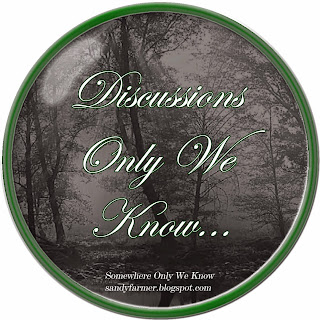 Books Change Lives So What Changes Do You Want to Make?

I don't think there's a reader among the book blogging community that won't admit that books change lives. The stories we read change us. We learn lessons through the experiences of the characters. We delve into the brains of those who think differently than we do. We feel emotions to situations that we ourselves have not experienced. We begin to understand how people make choices that we wouldn't make ourselves. We see from a mile away the mistakes that we wouldn't be able to see with a magnifying glass in our own lives.

This got me thinking. If books change people, then in what direction do I want to be changing? I mean obviously, just because I read a book about a serial killer doesn't mean that I'm going to go out and start murdering people. That's extreme. But it's made me wonder...how much of human behavior finds a way into books because it's human nature versus how much of human behavior becomes natural to us because we've read it so frequently in books?

For example, in the new adult genre especially, some event or conflict takes place and the character decides that they don't want to think about said event. So what do they do? I BET you can guess. They do one of two things. A) They go out and get drunk. or B) They find some random stranger to sleep with. These are not healthy behaviors. And neither of which fix the problem that the character is trying to avoid. So my question is, does this behavior happen so frequently in our culture because that's just what people do? Or does this happen so frequently in our culture because we're inundated with characters on TV and in books who choose this path?

Obviously, I think we all want to assume that we wouldn't take our behavioral clues from fictional characters, but I wonder does it happen more frequently than we think? Especially when we're repeatedly exposed to such behavior or concepts over and over and over again. Does the repeat exposure begin to wear on us to the point where we just assume that this behavior is normal...that this is the way we should behave or think?

You might say that you enjoy reading books about characters that you can live vicariously through. You might never walk up to a stranger and kiss them out of the blue. Or go skydiving. But a character in a book might, and reading about it gives you a chance to experience these things without having to experience them at all. Does living vicariously through characters who behave in a way you never would begin to change the way you think about their behavior? Or do you continue to be who you are despite what you read? What happens when you read books with characters whose choices inspire you and motivate you to make better choices and decisions for your own life?

Is it more important to read about flawed characters who make bad decisions than to read about characters who might seem larger than life because they constantly rise above their situation, to be the bigger person, to overcome? Aren't those the characters that stay with you? The books that you mark as being favorites? Is it more important for the characters we read about to have a happily ever after or to be characters that we can support and be proud of? While there might be a time in your reading life where you crave reading about a character whose life and choices are so bad they make your own look better, is that what we want to be reading the majority of the time?

Do we WANT to be able to comprehend how a person can justify cheating on their spouse? Do we want to be able to sympathize with the pathological liar who uses their parents' bad behavior as an excuse for their own? Do we want to feel the feelings of someone who decides to commit suicide? Do we want to be inside the minds of killers, drug addicts, and rapists? While these might make for some compelling reads, is this what we want to subject our minds to regularly? Are these the things we want to use to alter our thinking and change our person?

One of the things I love most about reading is being able to fall in love over and over again. I love reading about characters that find love, especially when that love means overcoming difficult circumstances. But we often find books that talk about being in the moment. Feeling the now. Love conquers all. If it feels right, it can't be wrong. It doesn't matter who you love or who you hurt, just as long as you get your happily ever after. Not all of these things are bad, but when you're beaten over the head with themes like these you might easily begin to slip some of this behavior into your own life. Living moment by moment based on your feelings and emotions alone with little thought to consequences or difficult questions or whether or not you might be destroying someone else's life.

And what makes for the better book? The one where a character "can't" keep their hands off of someone who is off limits to them no matter the consequences? Or the one where the characters says "I'm better than this" and takes the harder path? Caving in to our desires is easy. It's not difficult to allow those little touches, or steal those kisses, or justify that he loves me even though he still hasn't left his wife. It is much harder to respond to those who torture us with love. It is much more difficult to say "I respect myself too much to be a secret." Saying "I can't be your friend" is harder than sticking around in hopes that you can keep your hands off each other.

This post was sparked by reading the book Mr. President by Katy Evans (review coming soon). The basics of what you need to know is that Matt is running for president. His father was president when he was younger and he saw how he and his mother took a backseat to being President for his father. He decides that he's not going to do this to a woman or children. He knows any relationship he might have is temporary assuming he wins the presidency. And Charlotte knows he feels this way. She knows that Matt intends to be married to the job. Yet these two continually choose the physical things they're feeling in the moment over what their minds tells them. They both know that a scandal will cost Matt the presidency. Yet in the moments they essentially say "screw the presidency, I need to fulfill my physical desires." And I was annoyed. Beyond. At these two characters for their lack of self-control. Frustrated that they could both state that Matt winning the presidency was the most important thing, yet they continually put that at risk for a fleeting moment that they know will not last. So then I asked myself, why would I want to read a book like this? Where the characters continually make the wrong choice? And the answer I came to was that I don't. I don't want to be this type of person. And I don't want to read about it either.

Which direction do you want? What do you guys think? Am I giving books too much influence in my life or allowing them too much influence in the lives of others? Do repeat themes whether thoughts or action in books find their way in your own thoughts and actions? And have you spent time thinking about how you want books to change your life or not at all? Have you thought about this in relation to which books you choose to read? Let me know!

Email ThisBlogThis!Share to TwitterShare to FacebookShare to Pinterest
Labels: Discussions Only We Know