The Radius of Us - Review 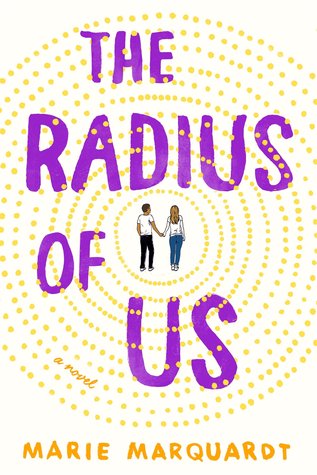 The Radius of Us

Goodreads description--What happens when you fall in love with someone everyone seems determined to fear?

Ninety seconds can change a life — not just daily routine, but who you are as a person. Gretchen Asher knows this, because that’s how long a stranger held her body to the ground. When a car sped toward them and Gretchen’s attacker told her to run, she recognized a surprising terror in his eyes. And now she doesn’t even recognize herself.

Ninety seconds can change a life — not just the place you live, but the person others think you are. Phoenix Flores-Flores knows this, because months after setting off toward the U.S. / Mexico border in search of safety for his brother, he finally walked out of detention. But Phoenix didn’t just trade a perilous barrio in El Salvador for a leafy suburb in Atlanta. He became that person — the one his new neighbors crossed the street to avoid.

Ninety seconds can change a life — so how will the ninety seconds of Gretchen and Phoenix’s first encounter change theirs?

Told in alternating first person points of view, The Radius of Us is a story of love, sacrifice, and the journey from victim to survivor. It offers an intimate glimpse into the causes and devastating impact of Latino gang violence, both in the U.S. and in Central America, and explores the risks that victims take when they try to start over. Most importantly, Marie Marquardt's The Radius of Us shows how people struggling to overcome trauma can find healing in love.

The Radius of Us isn't Marie Marquardt's debut novel, but based on the writing, I assumed that it was. On the one hand, I became entranced with the story, and I was determined to keep reading until I got to the end. However, I had a few complaints. In the first part of the novel, I felt like there was a bit too much description. There was a small inconsistency where Gretchen states that "Adam gets it. He understands that, these days, I can't even think about another body against mine." and then later "Adam is so completely out of touch with my reality that I feel like crying." This wasn't a huge issue, but it pulled me out of the story and left me furrowing my eyebrows. Also, Phoenix references soccer a couple of times and football once, but soccer is futbol in El Salvador. Again, this is something that perhaps Phoenix knows the difference between "soccer" and "football" for Americans since he's worked closely with missionaries in the past, but one would assume he'd use his native references to such. It's not inconceivable, but the references made me stop and think rather than being able to just continue reading.

However, my favorite quote from The Radius of Us is:

-"My American Dream's way more simple than that. I just wanna be able to go for a walk in the woods alone--get on one of those little trails in the forest and walk for hours. That would be so awesome. Or maybe head over to a friend's place after dinner to watch a football match on TV, and not have to look behind my back every five seconds, not to have to worry about whether I'll make it home alive."

The Radius of Us was one of those books that just rang so clearly of truth. Obviously, Marie Marquardt got inspiration for this story and these characters from real life. Somethings just can't be made up, and somehow the truth of The Radius of Us (specifically the events of Phoenix's life) came right off the pages. And after reading the acknowledgements, I feel this is definitely the case. It breaks your heart that people experience events in their lives like Gretchen and Phoenix experienced, but that is the world we live in.

Marie Marquardt touches on many aspects of loss and trauma. The physical effects of being assaulted. The psychological consequences of witnessing torture and death. The aftermath in our relationships when someone we love (or we ourselves) experience life changing events. She did a wonderful job touching on so many pieces of this puzzle.

The Radius of Us was better than I expected while also not being perfect. I wanted to know more and to keep reading. I actually read The Radius of Us very quickly. Yet, I felt like Marie Marquardt's writing could have used a bit more polishing. It wasn't bad at all, but a few more tweaks would have made reading this flawless for me. I was invested in the characters, their story, and if/how things would work out in the end. The Radius of Us gets 3.5 Stars. Have you read The Radius of Us? Let me know!