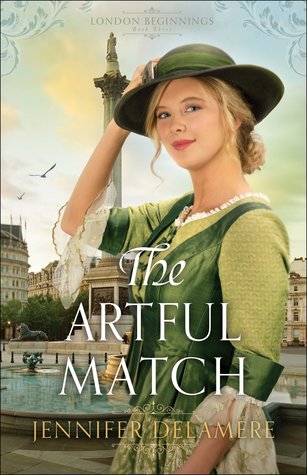 Goodreads description--Cara Bernay has never fit in. At loose ends in 1881 London after a near tragedy costs her a job, she befriends a rising young artist. With his help, she begins planning a new life and developing her own artistic talent. But soon Cara finds herself at odds with the artist's brother--a handsome but arrogant earl forcing his brother back to a "respectable" life.

Henry Burke, the Earl of Morestowe, feels the weight of growing financial burdens. His profligate and emotionally unstable brother is making matters worse, and Henry needs him back home. Despite misgivings about Cara's mysterious background, Henry sees she's a positive influence on his brother and on Henry's unruly young ward, and he strikes a deal with her to return with them to their estate.

But the family has their own secrets, and when Cara, drawn ever closer to Henry, stumbles onto the truth, she must choose between following her heart and pursuing a bold plan that could bring disaster.

The time period that Jennifer Delamere has set for this series is right in the midst of some major cultural changes. Each of these books and main characters are tackling roles that are on the verge of taboo yet becoming acceptable. Rosalyn is a performer in the theater. Julia is becoming a doctor. And Cara is an aspiring artist. I enjoyed each of these career choices being outside of what I'm used to reading about from this or similar time periods.

I was really concerned about Cara. Her situation is unconventional to say the least. How she met Langham, her living arrangements, and her naivete all had me worried that she was going to put herself in a situation that isn't respected. Yet her relationship with God and determination to make good on a vow that she made to Him is what put her in a place above servitude.

Considering Langham had more in common with Cara, I wasn't excited to see the two of them get together. Of course, that's not the direction the book went at all and I loved seeing how it all played out. One of my criticisms of The Heart's Appeal was that Julia and Michael's relationship just sort of happened through a lot of telling and not as much showing. Jennifer Delamere rectified that with Cara and Henry. There was so much relationship building and I loved being a witness to it.

Henry, himself, was such an honorable character. He cares for his family even though they're imperfect (who among us isn't) and even though they often made things more difficult for him. He shoulders the burdens of his title and what all that entails while working very hard to put their family back into a stable financial situation and at the same time trying to right some of the wrongs done in the past.

As a mother, I particularly enjoyed Amelia's role in this story. Her behavior felt very genuine and in line with what one might expect from a child who has over and over been abandoned. I loved seeing Cara relate to her, and I feel like I may have even learned a few things that I can put into better practice in my own life with my children. Seeing Henry and Amelia's relationship grow and develop was heart warming as well. Ten years ago this part of the story probably wouldn't have appealed to me at all. It's so funny how much becoming a mother changes you.

The Artful Match was so enjoyable for me. It ticked all my boxes. It surpassed my somewhat disappointed reaction to The Heart's Appeal. My only complaint is that things wrapped up very quickly with Cara's siblings and family there at the end. All in, The Artful Match gets 4 Stars. Have you read The Artful Match? What did you think? Let me know!