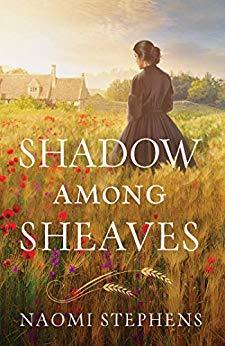 The Great Rebellion of 1857 was a remarkably bloody business. At a time when Britain’s imperial influence in India was sparking brutal clashes on both sides, no one could have expected Rena, an Indian woman, to marry a British officer—nor do they understand her decision to follow her mother-in-law to England after her husband’s tragic death.

Once the two widows are in Abbotsville, the stern yet compassionate Lord Barric attempts to help them despite his better judgment. Soon he is torn between the demands of reputation and his increasing desire to capture Rena’s heart for his own.

I'm quite familiar with the book of Ruth--the story of Ruth, Naomi, and Boaz. And since over the last year or two I've repeatedly turned to the historical fiction genre, I knew that Shadow Among Sheaves would be a book I'd like to read. A retelling of the Biblical love story of Ruth and Boaz set in Britain in 1857. I was completely intrigued by the unique aspects of this particular retelling.

Retellings are always tricky. There's a balance to wanting the retelling to match the original story with also wanting the retelling to take some poetic license and really make the story unique and new. Shadow Among Sheaves fell a little bit too much on the side of following the original story too closely. And by that I mean I wish I'd seen a bit more poetic license with the love story between Ruth and Boaz. Sure there was a connection between the two and feelings existed, but I never felt like the love between the two drove the story on. And while this is likely true for actual Ruth and Boaz, I wanted to romanticize this story for myself a bit more. And that's just my personal preference for the retelling of this particular story. I'm sure there will be other readers who praise Shadow Among Sheaves for this exact reason.

I was really impressed with how all of the details were thought out. Each piece of the original story had a matching counterpart in Shadow Among Sheaves. Naomi Stephens did a wonderful job crafting a story that matches with the Biblical narrative of Ruth.

I want to say more about Barric, about Rena, about Nell, William, and Alice. But I don't want to ruin too much. Barric was a bit rough for my liking. He was aloof and harsh and at times I wondered what Rena saw in him minus his help to feed and house her. Rena was complex and beautiful, strong and vulnerable. There were times when I felt that Nell could have done more to help their situation, but I'm not exactly sure what. William and Alice were wonderful additions to the original cast and added some necessary bridges between the high class of Barric's station and Rena's poverty.

In the end, Shadow Among Sheaves was a slow read for me that didn't win on all levels. I had hoped to find more of a pursuing love story that might have been taking some liberties from the original, but what I found was a very matched story but in a different setting and time period. It was good. It was enjoyable. But I didn't love it. Shadow Among Sheaves gets 3 Stars. Have you read Shadow Among Sheaves? What did you think? Let me know!