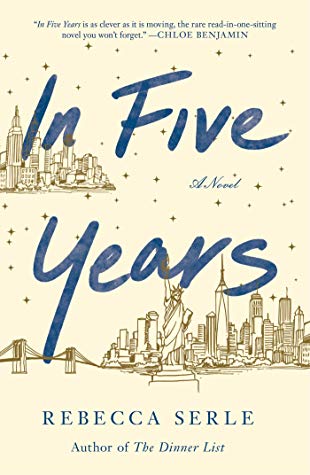 Goodreads description--Perfect for fans of Me Before You and One Day—a striking, powerful, and moving love story following an ambitious lawyer who experiences an astonishing vision that could change her life forever.

Where do you see yourself in five years?

When Type-A Manhattan lawyer Dannie Cohan is asked this question at the most important interview of her career, she has a meticulously crafted answer at the ready. Later, after nailing her interview and accepting her boyfriend’s marriage proposal, Dannie goes to sleep knowing she is right on track to achieve her five-year plan.

But when she wakes up, she’s suddenly in a different apartment, with a different ring on her finger, and beside a very different man. The television news is on in the background, and she can just make out the scrolling date. It’s the same night—December 15—but 2025, five years in the future.

After a very intense, shocking hour, Dannie wakes again, at the brink of midnight, back in 2020. She can’t shake what has happened. It certainly felt much more than merely a dream, but she isn’t the kind of person who believes in visions. That nonsense is only charming coming from free-spirited types, like her lifelong best friend, Bella. Determined to ignore the odd experience, she files it away in the back of her mind.

That is, until four-and-a-half years later, when by chance Dannie meets the very same man from her long-ago vision.

Brimming with joy and heartbreak, In Five Years is an unforgettable love story that reminds us of the power of loyalty, friendship, and the unpredictable nature of destiny.

I have no idea if I can accurately describe this book and how I felt about it, but I must give it a go. First of all, let me say that I used to be staunchly against looking at book reviews before starting or finishing a book because I didn't want to be influenced by anyone else's thoughts or opinions. I would check out the ratings but not the content of people's reviews. But since I've been burned by so many books (as in not getting a happily ever after, not the happily ever after I wanted, or just generally disliking the book), I've gotten to a point in my reading life I thought I would never see. I do now read reviews (or skim them) before picking up a book if it's an author I'm not familiar with or if something else leaves me feeling unsure (description, cover, etc). I'm looking for unexpected content being mentioned in reviews. I'm looking for information about any of my deal breakers (things I know myself well enough to know I don't enjoy reading about) as well as certainly how the reviewer felt about the book. Sometimes this does affect my expectations of a book and my expectations can influence my overall feelings as well. But I find this risk of influence to be acceptable over DNFing more books or trying to force myself to read something I'm not enjoying.

All of that being said, I checked out a few reviews before I picked up In Five Years because I was in a little bit of a slump. The reviews I saw basically said the book was nothing like they expected, there was a romance but again not what you expect, and that everyone was in tears at the end. In the case of In Five Years, I think my attempts at lessening any stress associated with the process of reading this book backfired, and I ended up more anxious and stressed.

The reviews were right. This book isn't at all what you expect. There is a love story but as was said, not how you would expect. Although I didn't cry. At all. Or even tear up. But to be fair it takes a lot for me to cry. I was too wrapped up in figuring out how this was going to work.

In Five Years was written in a way that had me devouring it. I finished it within 24 hours which is a feat these days. But I felt like I was reading a train wreck...in a good way. It's funny because that's the 2nd time I've felt the train wreck analogy so sharply within a 3 book span. It just so happens the first time the train was wrecking I knew there was no hope, but I did feel hope with In Five Years somehow.

Ugh this review is all over the place. I can't talk to you about the events of the book because EVERYTHING is a spoiler, but I can tell you how it made me feel. I was hooked. I read it quickly as I've said. Call me cliche but I was hoping for the outcome that the description and beginning hinted at even though the reviews said not to. I guess I just hoped it would come about in a way I didn't expect. So I felt like I wasn't able to connect to side characters as much as I would like. I don't know. I didn't dislike the book, but it wasn't what I wanted at the same time.

For as long as this review is, I know I haven't actually said much. I just know that I was left wanting. In Five Years was good, but definitely not what I hoped it would be. It's a book that will suck you in and spit you out. I'm giving it 4 Stars. Have you read In Five Years? What did you think? Let me know!