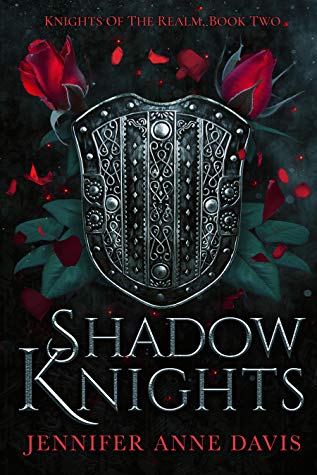 Shadow Knights (Knights of the Realm, # 2)

Goodreads description--As a member of the Knights of the Realm, Reid swore an oath to protect her king only to discover he harbors a traitorous agenda.

Being a woman raised in a man’s world, Reid thought becoming a Knight would give her purpose and strength. So far, it has done nothing but give her trouble. The king ordered her to spy on the Axian royal family while she prepares for her marriage—a marriage neither she nor Price Dexter wants. Once in Axian, Reid realizes she’s being used as a pawn in a decades-old political match. With the king and Knights seemingly at odds, Reid’s allegiances are torn, especially when she finds friendship in the unlikeliest of places.

As the kingdom of Marsden teeters on the brink of civil war, Reid must decide whose side she’s on—even if that means betraying her king in order to save the kingdom.

I was so excited when I read the end of Realm of Knights and saw that we were moving from a forbidden romance to a hate-to-love possibility. I couldn't quite put my finger on my issue with Gordon, but I was immediately excited about the possibility of Dexter.

Reid was excited about moving to Axian because of their views on women's equality. So different from Marsden where she had to be raised as a boy. She's happy to be able to live as she feels. But that's not what she arrives to find waiting for her in Axian. She has a role to play and it isn't being herself completely. However, the good thing for Reid is that she's being put into a position where her voice can be heard where it can make an impact...as long as she and Dexter can find a way to work together.

Dexter has a heart for his people. For doing the right thing. I wasn't always sure that his ideas or plans were what is best... but time will really tell how things play out in the future.

I enjoyed every single sentence of the journey between Reid and Dexter's journey thus far. They have to find a way to trust each other which involves shared experiences and shared love for certain people--those closest to them as well as the general public.

I feel like there is much to say about this book and story, but I don't want to spoil anything.

I really enjoyed Colbert, Gytha, Henrick, and Nara. I worry a little about Colbert and some things that I see as a possibility for the future. Gytha...I hated initially, but I grew to appreciate her and felt bad for her through the story as well. Even though, Gytha is perfectly capable in the physical realm. Henrick is one of those people who sees the best in others to a fault. He won't listen to sound counsel because he is so sure in his faith in others. Nara is just likable all around. I want to be her when I grow up.

If Hidden Knights was already published I would have bought it immediately upon finishing Shadow Knights. I got sucked in and read this story in less than 24 hours... even staying up late at night to read (which is truly rare since having kids). Shadow Knights gets 4.5 Stars. Have you read Shadow Knights? What did you think? Let me know!