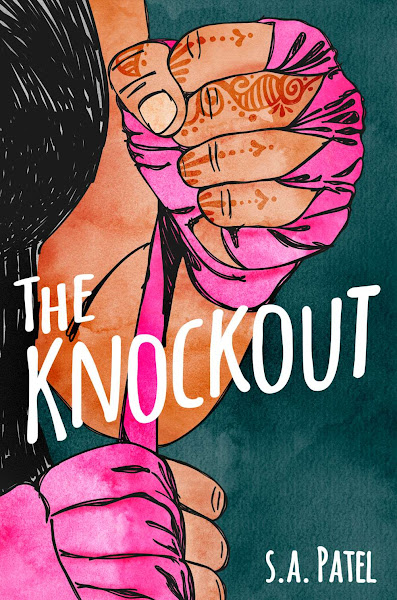 Goodreads description--A rising star in Muay Thai figures out what (and who) is worth fighting for in this #ownvoices YA debut full of heart.

If seventeen-year-old Kareena Thakkar is going to alienate herself from the entire Indian community, she might as well do it gloriously. She’s landed the chance of a lifetime, an invitation to the US Muay Thai Open, which could lead to a spot on the first-ever Olympic team. If only her sport wasn’t seen as something too rough for girls, something she’s afraid to share with anyone outside of her family. Despite pleasing her parents, exceling at school, and making plans to get her family out of debt, Kareena’s never felt quite Indian enough, and her training is only making it worse.

Which is inconvenient, since she’s starting to fall for Amit Patel, who just might be the world’s most perfect Indian. Admitting her feelings for Amit will cost Kareena more than just her pride–she’ll have to face his parents’ disapproval, battle her own insecurities, and remain focused for the big fight. Kareena’s bid for the Olympics could very well make history–if she has the courage to go for it.

I read The Trouble With Hating You by Sajni Patel in the spring and knew that I wanted to check out more by her. I was honestly on the fence about The Knockout at first though. I took martial arts in high school and would love to continue if I had time, but it just wasn't a priority for me. But even still, I wasn't sure if I was going to enjoy a book where Muy Thai took such a prominent place in the story. And being an Olympic hopeful just added to my indecision. I'm always torn between wanting the characters to shoot for the stars and aim for the best (Ivy league schools are another example) and knowing how very few people make it to these levels. It's a balancing act between wanting the characters to aim high and also wanting a character that is relatable. And to be frank, sometimes overachievers are unlikeable. Anyway, I decided to pick it up, and I really enjoyed it.

Kareena has a lot on her plate. She's been accepted to the US Muy Thai Open which leads to other opportunities if she does well. This is a high-level performance. I don't think I could handle the pressure personally. Her family fully supports her, but her father is struggling with health problems. He's bordering on kidney failure, and the medical bills to take care of him have been stacking up. Kareena isn't sure how she's going to pay for the fees and equipment needed for the Open. She's also dealing with high school drama. She and a friend are on the outs over a boy they both liked. Another "friend" is talking trash about her. And she's got a boy showing her attention that she just can't deny even though she shouldn't have time to focus on a relationship, and she's not allowed to date anyway. I liked her. She's fighting to allow her opinion of herself to come out on top of the opinions others have of her.

Amit seems to have had a crush on Kareena for a while. He needs tutoring in programming and Kareena is chosen to help him out. Only he doesn't really need help considering he's pretty much a programming genius and has been working for his uncle's company on some top-secret program that will change the entire medical field. I wish what his program was intended to do was spelled out a little more just for curiosity's sake, but it wasn't necessary to know the details for the story's purposes. Amit isn't allowed to date either, and his parents don't exactly approve of Kareena's choice of extracurricular activity--Muy Thai.

I liked that Kareena and Amit kept their relationship clean. These days teenagers seem to be racing toward sexual experience. Obviously, that makes The Knockout much more YA (which it's labeled as) than The Trouble with Hating You (which is an adult book with adult situations and content). But I always appreciate clean romances personally. I also appreciated a further dive into the cultural aspects of The Knockout.

The Knockout gets 4 Stars. Have you read The Knockout? What did you think? Let me know!