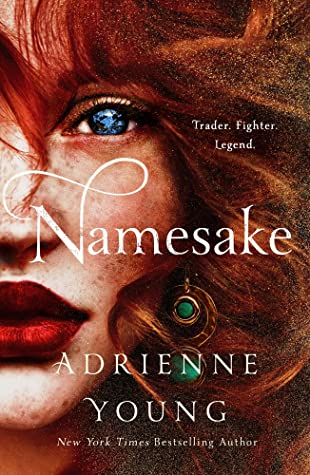 With the Marigold ship free of her father, Fable and its crew were set to start over. That freedom is short-lived when she becomes a pawn in a notorious thug’s scheme. In order to get to her intended destination she must help him to secure a partnership with Holland, a powerful gem trader who is more than she seems.

As Fable descends deeper into a world of betrayal and deception she learns that her mother was keeping secrets, and those secrets are now putting the people Fable cares about in danger. If Fable is going to save them then she must risk everything, including the boy she loves and the home she has finally found.

Fable was one of my favorite reads from 2020. Considering the cliffhanger that it ended with, I would have started Namesake immediately if I had it in my possession. So when I saw it for review request, I jumped on it. And read it as soon as I could.

Due to the nature of events--Fable being kidnapped by Zola--Namesake didn't exactly start off in the best of places. She's surrounded by enemies that pose a threat to her even if they've been warned not to touch her. Zola needs her to do a job for him along with as many other dredgers as he can get. What's more, Clove, who used to be her father's right-hand man, is crewing for Zola as well. Fable takes this to mean that even he can't be trusted. I won't discuss much more about the plot so that I don't spoil anything.

Fable isn't even sure that West will look for her, but she should have known better. West is willing to do just about anything to get Fable back. He's determined not to return to the Narrows without her. Even at the detriment of himself, his crew, his ship... anything is fair game in his attempt to save Fable. I felt slightly conflicted because these two could use some communication skills, but trust and love were there between them.

All of the side characters were lively even if I wish we'd had a little more time with them, particularly Koy and Willa. Even Saint didn't have much of a role. I mean he was integral but also absent.

The world is still one of my favorite parts of this series. The ships and the dives. The gems and various ports of call. All of that made this world a place I'd love to return to in the future.

I won't say that I enjoyed Namesake quite as much as Fable, but it was a pretty good follow up. So much of the plot was about one-upping the various big bad enemies. But I enjoyed the relationships and world-building. I would love to read more books in this setting. Namesake gets 4 Stars. Have you read Namesake ? What did you think? Let me know!