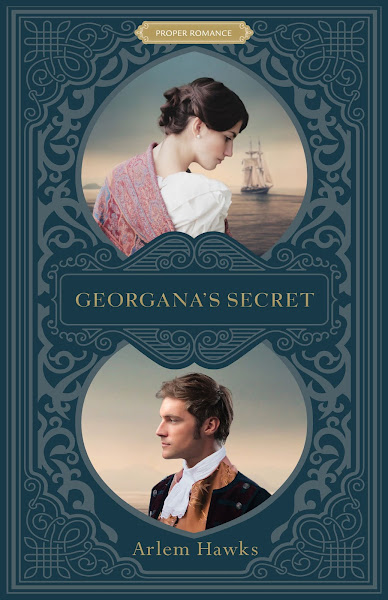 Georgana Woodall dreams of freedom—freedom from her past and freedom from her secret. She has been living on her father’s ship for years, disguised as a cabin boy named “George.” But hiding her true self is becoming more difficult, and she yearns to break free of her life on the sea.

Lieutenant Dominic Peyton has no time in his life for love, not with his dedication to His Majesty’s Royal Navy claiming his full attention. Determined to prove himself to his new captain, he strives to be an exemplary officer and leader. When he sees the captain’s cabin boy being harassed by the crew, he immediately puts a stop to it and takes the boy under his wing.

Georgana quickly loses her heart to Dominic’s compassion and care, but needing to maintain her disguise as a cabin boy, she is convinced nothing can come of her affection.

Georgana’s Secret is about two hearts yearning to find a safe harbor, and possibly, a lasting love.

I have been on a historical fiction journey for a couple of years now. Where I once used to comment that I rarely read historical fiction, I'm now devouring just about anything I can get my hands on. I almost passed by Georgana's Secret, but I really enjoyed it so I'm glad that I didn't.

Georgana grew up living with her grandmother and mother when her father was off at sea in the Navy. However, her grandmother was quite abusive to both her mother and Georgana. She was adept at hiding it from Georgana's father, but after her mother's death, her father stole her away and hid her on his ship in disguise. She might have escaped her grandmother's clutches, but she isn't safe from harm. The other ship boys harass George due to the captain's special treatment. And plus, there's the fact that the ship is a Navy vessel and the country is at war so battle happens.

Dominic is assigned to Georgana's father's ship as First Lieutenant. And he takes George under his wing and teaches her how to defend herself against the harassment of the other boys. The two develop a friendship. Georgana begins to develop feelings, but maintaining her disguise is too important. At the same time, Dominic's mother reveals the fact that Captain Woodall has a daughter named Georgana, and the coincidence is too much for Dominic not to put the facts together.

That being said, I was a little hesitant about the progression of their relationship. Georgana didn't know Dominic knew she was a girl. So her hopes of more than friendship developing between them was a bit odd to me.

-“To dance is to be a little ridiculous, is it not?”

-"...if I am to keep it from the world, I will not keep it from you. I wish to never hide my thoughts, my feelings from you again.”

I tried to think what I might wish to be different about Georgana's Secret and I couldn't really come up with anything. I feel like because of that the story and characters deserve a 4-Star rating. Have you read Georgana's Secret ? What did you think? Let me know!