The Viscount & the Vicar's Daughter - Review 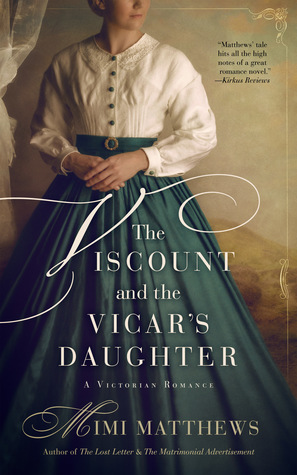 The Viscount and the Vicar's Daughter

After years of unbridled debauchery, Tristan Sinclair, Viscount St. Ashton has hit proverbial rock bottom. Seeking to escape his melancholy, he takes refuge at one of Victorian society’s most notorious house parties. As the Christmas season approaches, he prepares to settle in for a month of heavy drinking…until an unexpected encounter changes his plans—and threatens his heart.

Valentine March is not the drab little spinster she appears to be. When her new job as a lady’s companion lands her smack in the middle of Yorkshire with England’s most infamous rake, she resolves to keep her head down and her eyes fixed firmly on her future—a future which most definitely does not include a sinfully handsome viscount.

A MATCH MADE IN SCANDAL

A friendship is impossible. An affair out of the question. But when one reckless act binds them together, will two star-crossed souls discover there’s more to each other than meets the eye? Or will revelations from the past end their fragile romance before it begins?

I found Miami Matthews with the release of The Lost Letter . And I've read all of her published books since and have been slowly working my way through the books she published prior. The Viscount and the Vicar's Daughter went on sale, and I snatched it up. When I finished a fantasy retelling, I knew switching things up to historical fiction would be the best way to keep me from going into a reading slump and so I picked up this book.

Valentine March has just hired on as a lady's companion for one of the women attending the same house party as Tristan. She's unaware of the party's true nature, but she needs the money as her mother died in childbirth with her and her father recently passed away. Her heart is broken because her mother's drawings, the last tangible link she had to her, were destroyed by her employer's spiteful daughter. Tristan stumbles upon her and he's rude, truthful, and comforting to her.

Tristan warns Valentine of the nature of the house party as well as the reputation of Viscount St. Ashton...himself. He just doesn't exactly tell her he's talking about himself since he introduced himself to her with his Christian name. Upon arrival at the house, Tristan's father tells him that within the year he will be cut off from his father's funds if he doesn't straighten up and stop his wild behavior. In a bit of a tizzy and slightly inebriated, Tristan follows Valentine to the conservatory and proceeds to entice her into a kiss that turns quite passionate. The two are discovered by Valentine's employer, her daughter, and Tristan's father. And so begins the plans to minimize the scandal and save Valentine's reputation.

The two agree to marry and have a bit of an instalove relationship. But they have to spend a little time apart to distance themselves from the scandal and do everything above board. The time apart allows Tristan to find himself and something he can be passionate about that both is and isn't spurred by Valentine. And she spends the time connecting with her late mother's family.