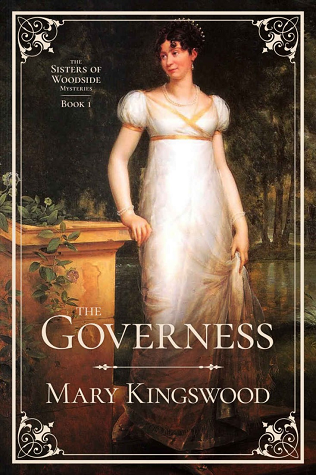 The Governess (Sisters of Woodside Mysteries, # 1)

Goodreads description--When Mr. Edmund Winterton of Woodside dies, his daughters find themselves penniless and homeless. What can they do? Unless they wish to live on charity, they will have to find genteel employment for themselves.

Annabelle becomes governess to the daughters of the recently bereaved Earl of Brackenwood. She has no idea how to teach, but her pupils can learn all they need from books, so how difficult can it be? She’ll need all her ingenuity to cope with the rebelliousness of her charges and the unwanted attentions of their father. But when her past returns to haunt her, she has to make a difficult decision.

Allan is slowly getting used to life as a widower, but his mother is determined that he must marry again and produce an heir. He is determined that he won’t, although the new governess is just the sort of woman he could fall in love with. But when a face from long ago reappears and stirs up suspicion, he has to consider the possibility that his wife’s death was not natural. What is worse, he himself is the obvious suspect. If he can’t prove his innocence, he may lose everything - his home, his new love, and even his life.

A traditional Regency romance, drawing room rather than bedroom.

I got The Governess audiobook on sale. I have been back into the world of audiobooks now that I am in a season of spending a lot of time in the car doing school runs. Historical romance has really pulled me in over the last few years, and so this seemed to hit many of my preferences. One thing I'm not always excited about though is mysteries so I wasn't sure how I would feel about that part.

Annabelle is one of 5 sisters. Rosamond is the oldest and is currently married well. Lucy is widowed. And then there's Fanny, Margaret, and Annabelle herself. Their father has recently died and left them penniless. Each of the girls unmarried has to now find places of employment. Annabelle is off to become a governess for an earl's 3 children who recently lost their mother.

From the moment Annabelle meets Allen, he is nothing but kind and compassionate towards her. He is sympathetic to her recently reduced circumstances, as well as her grief over the loss of her father and separation from her sisters. And he prefers to treat her with the respect that a wellborn lady deserves. A governess often finds herself alone because she is not quite family but is also not quite a servant either. Allen's mother, the dowager, disagrees with Allen's decision and pegs Annabelle as an opportunist from the start.

Mary Kingswood has written a multilayered story in The Governess. Moreso than I realized at first. All of Annabelle's family relationships, Allen's family relationships. Each of these characters has a history. There are many side characters. Mr. Williton-Forbes might be my favorite side character. (By the way, I have no idea if I'm spelling these names correctly since I don't have the print version to reference.)

Allen's sister-in-law reveals a letter written by his wife and her sister, Eloise, stating that she believes someone is trying to kill her. Allen doesn't have any reason to believe this to be true, but he feels he must have the matter investigated. And that's where my favorite side character comes in. Mr. Williton-Forbes is actually a lawyer. And I found the investigation interesting since the period is vastly different from current times.

Of course, I always prefer romance to drive any story. Annabelle gave her heart away sometime before this story began. As a result, she isn't in any place to develop new feelings for anyone. Yet that doesn't stop her from admiring Allen's treatment of her and his general goodness. Allen is the first to develop an attraction and feelings for Annabelle. He makes his interest known to her. And overall, the relationship is a slow build that always feels authentic. And the payoff is enjoyable that way.

I do have to say that Allen's flowery speeches towards the end were a bit cheesy, even for me. I might have rolled my eyes a bit.

The mystery was well done, especially considering I don't always enjoy this part. I pegged the truth of what happened fairly early. Yet I continued to question myself and the characters. And even when I thought I had the who determined, I still wondered how. In the end, I wasn't exactly surprised, but the way we arrived at the information was done in a way that I didn't mind any of the journey at all. I wonder if the series follows each of the other sisters how each one can have some mystery or other tied to them. I suppose I should suspend ideas of reality and just enjoy the journey, but it defies imagination that each of these sisters could possibly encounter a murder or mystery present or past.

The Governess was much better than I expected it to be. I enjoyed the slow-building romance between Annabelle and Allen. I actually enjoyed the mystery. The narrator, Johanna Stephens, did a wonderful job. The side characters and backstories were all diverse, layered, and deep. The Governess gets 4 Stars. Have you read (or listened to) The Governess? What did you think? Let me know!