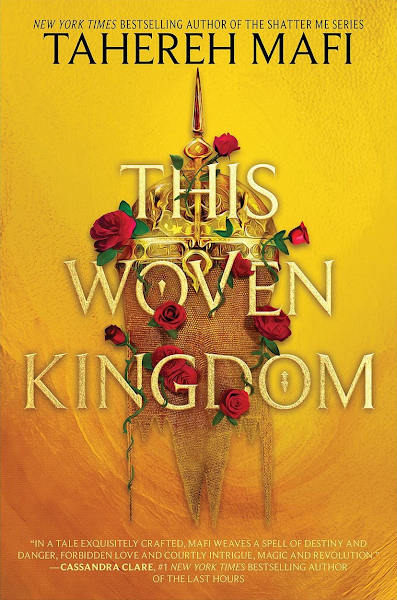 To all the world, Alizeh is a disposable servant, not the long-lost heir to an ancient Jinn kingdom forced to hide in plain sight.

The crown prince, Kamran, has heard the prophecies foretelling the death of his king. But he could never have imagined that the servant girl with the strange eyes, the girl he can’t put out of his mind, would one day soon uproot his kingdom—and the world.

Perfect for fans of Leigh Bardugo, Tomi Adeyemi, and Sabaa Tahir, this is the explosive first book in a new fantasy trilogy from the New York Times bestselling and National Book Award-nominated author Tahereh Mafi.

This Woven Kingdom has kind of a classic plot. Boy and girl should be enemies. Both are rulers of a kingdom. One is in a position of power. The other is in the lowliest position possible and must find a way to rally loyal subjects and rise from the lowly place back to power.

Kamran is a prince that will soon turn king. His grandfather knows his time on the throne is coming to an end. Kamran witnesses an interaction with a servant girl in the street where a street boy tires to rob her and she disarms him. Kamran immediately realizes something is off with this girl. He thinks there's a sinister quality about her, but he soon learns that she isn't out to harm anyone.

Alizeh has long given up on the idea of reviving her kingdom. She longs for much simpler things now. Safety. Security. A clean room. Water. She works hard and keeps her head down because doing anything else will get her killed. But some people can't leave well enough alone. Kamran's interest in her draws the notice of the king. And long ago the king received a prophecy that this girl would result in his demise. So he aims to get to her first.

Alizeh and Kamran have a connection that can't be denied. They are drawn to each other and appreciate the other for who they are, not what they are or what they can do. And it was only the romantic relationship that drove me to keep reading because not much else happened in the story. We'll I take that back. A lot happened right there at the end of the book. And so much happened so fast that I sometimes questioned what I was reading. Did I skip something? Did something not get explained? We went from zero to one hundred there at the end.

-It took little, he realized, to rekindle a fire that only dulled, but never died.

-“I am an extremely generous person. Have you already forgotten how long I allowed you to sit on me?”

-“You have consumed my thoughts since the moment I met you,” he said to her. “I feel now, in your presence, entirely strange. I think I might fetch you the moon if only to spare your tears again.”

-Even in her most desperate moments, Alizeh had found the courage to move forward by searching the depths of herself; she’d found hope in the sharpness of her mind, in the capacity of her own capable hands, in the endurance of her unrelenting spirit. She would be broken by nothing. She refused.

-“You might do us all a favor, Hazan, and begin to manage your expectations of my state. This is where I live, minister. Here, between angry and irritable, lies my charming personality. It does not change."

It took me nearly an entire month to read This Woven Kingdom. That wasn't exactly the book's fault. We moved two days after starting this book, and I found myself falling asleep every time I picked it up. Now mostly that's because I was exhausted, but I do think the right book could have helped me stay awake a little longer. Regardless, I liked the characters, and I'm interested in seeing what happens next. This Woven Kingdom gets 3.5 Stars. Have you read This Woven Kingdom? What did you think? Let me know!