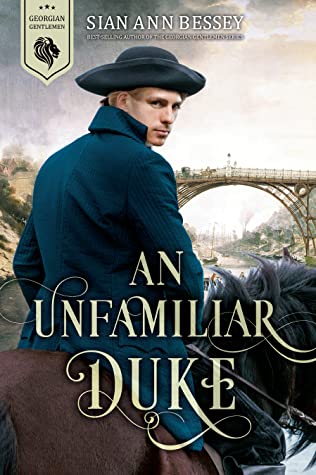 Publication: May 16th 2022 by Covenant Communications

Goodreads description--At eleven years of age, Rosalind Ainsworth was convinced that Sebastian Lumley, the future Duke of Kelbrook, was the most odious young man she’d ever met. And ten years later, after having had no contact with the nobleman in the intervening time, her opinion of him has not changed. Unfortunately, neither has the marriage contract their fathers signed soon after her birth.

As Rosalind’s twenty-first birthday and the appointed wedding day approaches, Sebastian makes a rare appearance in London. His first meeting with Rosalind since childhood goes less than perfectly, but Sebastian has a compelling reason for honoring their marriage contract—a reason outlined in a document kept behind his workshop’s locked door.

After a quick wedding, the new couple relocates to Finley Park, where their acquaintanceship slowly blossoms into affection. But when Sebastian’s secretive work threatens their fledgling relationship and Rosalind’s life is placed in jeopardy, Sebastian finds himself forced to choose between the man he has pledged to help and the woman he has come to love.

I can't think of a single book where I've disliked the story that focused on a marriage of convenience where the couple ultimately fell in love. I mean I guess I'm just a sucker for this trope. An Unfamiliar Duke was no different.

Rosalind and Sebastian have been betrothed since infancy. Their fathers were friends and hoped to spare their children the difficulties of finding a good match. Sebastian and Rosalind seemed to have only really met once in their past when they were children. Sebastian was fifteen I believe, and Rosalind was eleven. They didn't have the best initial reaction to the other. Rosalind talked a lot for a boy that was used to being mostly alone. And Sebastian cut her out in a way that made Rosalind feel unwanted. The two grow up knowing from this point that they're betrothed, but both are hoping to find a loophole to escape the contract.

Unfortunately, the contract their fathers created is pretty airtight legally speaking. When the upcoming marriage can no longer be ignored, the two meet, and Sebastian at least asks Rosalind what she wants to do.  Luckily, these two ended up having some common areas of interest that laid the work for a friendship to form. From there things built rather slowly. Through shared experiences and teamwork, these two begin to develop a relationship that is not quickly broken.

The relationship drove the story for me in An Unfamiliar Duke which is always my preference. Although there was a mystery or an added layer to the story that created some suspense and action mostly at the end. None of that was unpredictable. Yet I didn't mind because, again, it wasn't the driving force of the story.

-"You possess all the qualities necessary to be a marvelous wife."

-And if she truly wished to keep her list balanced, she must include the good no matter her current feelings.

-"...do not wish to compete with anything higher than this level of passable."

An Unfamiliar Duke was just what I was hoping it would be. Rosalind and Sebastian essentially have a marriage that they didn't pick yet can't get out of. They find a way to build a friendship that develops into more. All the while there are forces trying to work against them. I enjoyed every part of this book. An Unfamiliar Duke gets 4 Stars. Have you read An Unfamiliar Duke? What did you think? Let me know!