Games in a Ballroom - Review 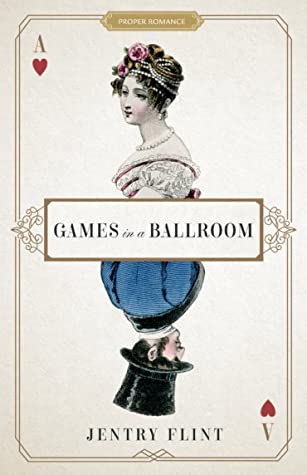 Games in a Ballroom

Publication: May 3rd 2022 by Shadow Mountain

Olivia Wilde has resigned herself to never finding a love match. Her father has insisted she marry a man with a title, if only to increase his own standing and reputation in society. But the men her father deems acceptable are, at best, boring and uninspiring, and at worse, are as brutish as her father, and are only looking to increase their own diminishing coffers. With her future looking dismal, Olivia decides to enjoy the last few months of freedom with her childhood friends, including the handsome Emerson Latham. His devilish smile and flirtatious teasing stirs up feelings she knows she cannot entertain.

Emerson is struggling to rise to his responsibilities after the death of his father. Though he might still be learning what he needs to do as the head of his household, one thing he knows for sure is that he wants Olivia Wilde to be his wife. Having grown up as childhood friends with Olivia, Emerson long ago had fallen in love with her quick wit, beauty, and passionate heart. However, without a title, he will never be permitted to court Olivia openly. But he has a plan that may give him a chance to court her in secret.

As the season kicks off, Emerson proposes a bit of fun with a playful game of tag. Olivia’s friends are delighted by the idea, though Olivia is more wary. After all, the game must be played in secret and they must be discreet when tagging each other at dinners and balls and the theater. As the romance builds between Olivia and Emerson, so does the risk of being discovered. Not only are their reputations at stake, so is their safety if they are caught by Olivia’s father, who has an explosive, and at times violent, temper.

Can their love find a happily ever after before the game ends?

Games in a Ballroom has such a unique concept. Playing a secret game of tag at various balls definitely sounds like a new way to flirt with the object of one's affection. Jentry Flint did a good job showing that games are important to this group of characters. Emerson, Arabella, and Olivia seem to have grown up constantly playing games with each other that exceeded the typical child. When Emerson went off to school, he met two other gentlemen that made up a trio. She showed that even as adults these games were important to each character to maintain a feeling of who they are deep down.

Olivia's father has built his financial empire from scratch. And it seems that all he cares about is advancing. He married Olivia's mom as an advancement. And all he lacks is a title. Now Olivia marrying someone with a title still doesn't actually get him a title, but that's as close to one as he'll get. He truly seems to care nothing about anyone but himself. He's volatile, angry, and abusive. And Olivia and her mother have done everything they can to fly under his radar and not upset him.

Emerson is struggling to find himself now that his father has passed away. He has new responsibilities. Finding a wife for himself, a husband for his sister, and taking care of his widowed mother is just a few of those weighty responsibilities. He doesn't have any problems setting his eyes on who he wants to marry. But he has to convince her that he's not just interested in playing games with her. And he has to convince her that defying her father will be worth it to her.

The side characters were all lively. I would love to read stories about each of them. And I absolutely hope Jentry Flint turns this into a series. I'm intrigued about Arabella and Northcott. But it will be interesting to explore Bradbury as well. He's strictly against marrying, and his vices and games draw him further away from the idea. I hope she explores the idea of writing their stories.

-"The true making of a man is not measured by what he can physically obtain, but by his love for the woman he would give up all else for."

-"Blazes, Emerson, why did you have to go and make it uncomfortable?"

Games in a Ballroom is the first book to hold my interest in about a month. Even though I read it in October 2021 and it doesn't publish until May 2022, I didn't hesitate to pick it up. The description completely pulled me in, and Jentry Flint didn't disappoint with her debut. Games in a Ballroom gets 4 Stars from me. Have you read Games in a Ballroom? What did you think? Let me know!