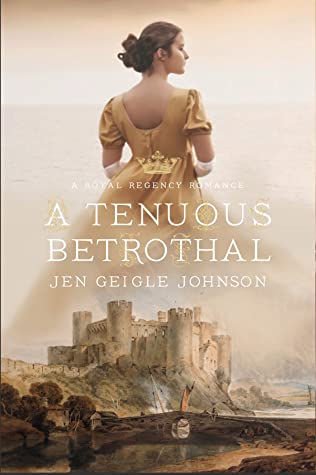 Goodreads description--Rhianna Davies is well-acquainted with heartache after the painful loss of her parents. At the arrival of her ghastly uncle, she is brought even lower: Rhi has been banished from her family’s estate home and must rely on the kindness of her tightly knit Welsh miners for help. Without the protective love of her parents, Rhi has no illusions that hers will be a happy ending—until an addendum to her father’s will arrives in the hands of a prince.

Marc Wilhelm, Prince of Oldenburg, is in Wales with one purpose: to claim his betrothed. A long-ago promise between their fathers forges an indelible link between Rhi and Marc, but there remains just one problem: neither wants to marry a stranger. With no remaining ties to Wales, Rhi agrees to accompany Marc to Oldenburg, where he will forfeit their betrothal so she may have her pick of husbands. But their journey takes them down unexpected paths, from the depths of a Welsh mine to the marriage mart of London to a warm reception in Oldenburg. Rhi and Marc discover that their connection and their challenges run deeper than either anticipated, but whether from their own hesitations or from danger that threatens without, the couple might be thwarted before they can even begin the happily ever after they so richly deserve.

I've only read one book by Jen Geigle Johnson before--His Lady in Hiding. It was good, but not great. I remember enjoying parts of it, but then feeling like other parts just weren't up to my standards. And well, that's basically how I felt about A Tenuous Betrothal.

The story started off well. Rhianna's parents died leaving her under the care of her uncle. Her uncle has no purpose for her. She's basically in his way and has been relegated to a secluded hunting lodge on the family property. Except it turns out that her father made provisions for her before he died in the form of a betrothal to a longtime friend's son. Rhianna has no desire to be in an arranged marriage, but she does desperately hope for a future beyond being stuck in a hunting lodge in a small mining town. And bonus, the friend of her father is a king meaning his sons are princes. And there happens to be several of them to choose from. On top of that, the one who actually shows up to rescue her is quite handsome and the two make a good team upon first meeting.

Marc has no desire to wed any time soon. He is head of security for his country and that means that he's constantly in harm's way from those who wish ill upon their kingdom. He knows that marrying will require him to relinquish his duties so as to not place himself or his wife or family in any undue harm's way. Despite feeling a pull, an attraction toward Rhianna, he constantly tries to pull away.

My biggest frustrations revolved around the wishy-washiness of these characters. One moment they're heading in one direction, the next they change course in another. They're traveling to one location but abruptly go back the way they came. One minute they agree that there's nothing to be between them, the next they're cozying up on a ship only to turn around and part ways as soon as they make land. I found one too many "we can't be togethers" and "you don't understands."

Ultimately, I feel torn about A Tenuous Betrothal. Some parts were good and I was eager to read more, particularly the beginning. Other parts I struggle with wanting to roll my eyes and getting annoyed with the characters. I'm intrigued for future books, but not sure I would want to go back to read the previous in the series (I didn't know this was in the middle of a series when I requested it), and I can't say for sure that I will carry on the series or not. A Tenuous Betrothal gets 3 Stars. Have you read A Tenuous Betrothal? What did you think? Let me know!