So it’s day 3 here at Armchair BEA and today’s topic is a discussion of real life experiences be they...partnerships with the local literary scene, attending author events and signings, or getting together with bloggers in your area.

And well…I think to myself, “Self, you don’t really have any stories.” Even though I’ve had my blog for over a year, I still feel so new at it all. I don’t have tons of followers. I’m getting more page views. But I don’t post daily. I can’t get ARCs of every book I want. I haven’t read every book that I want to read (that my friends is an unachievable goal). Shoot, I can’t even read every book I want to read that I own. Since I’m still “new” to blogging, there’s so much I feel like I don’t know--such as how do I go about hosting a giveaway be it self-sponsored or sponsored by someone else. I didn’t even know I should be looking into partnerships with my local library (which I’ve yet to visit by the way, a crime I know) or a locally owned indie-bookstore (do we even have one of those? And how do I not know the answer to that?). How exactly do I go about doing this, and what is the goal I’m trying to achieve by doing so? All of this must be well thought out ahead of time (I’m a planner, you see.). But I’m trying not to stress out about any of those questions because I’m sure it will all come in due time, and when it does, I’ll be ready for it. In the meantime, I’ll just keep reading any free moment I can. That is the point of this afterall.

I have only one story of meeting an actual author, and I’ve mentioned it on my site before; but I’ve never really gone into full detail mode. So I guess that’ll be my experience that I share. (What’s up with me being so repetitive with my Armchair BEA posts?)

My tale starts on a May day back in 2010. My husband and I are remodeling our house. Built in the 1960s, there’s been quite a lot of work we’ve had to put into it. Well, it so happens that my dad used to work for a contractor and has years and years of construction experience, and while we love to utilize that experience whenever we can, Russ tries really hard (and does a great job) of doing everything he can on his own—he’s independent that way. But it just so happens that this was a two man job—and by man I mean I couldn’t have really helped that much. So we planned it with my dad to come over and help Russ put in our new front door on May 22nd 2010.

While the men did manly things, screwed things in, hammered some stuff, made a few trips to Lowes, etc., I was supposed to be working on some school work (ugh!). And yeah, I did some of that. But I also got sidetracked researching something else and came across an Indie Bookstore in Fairhope, Alabama called Page and Palette. And so I stopped on their website. I wasn’t on their page mere moments before I saw that Richelle Mead, the author of the Vampire Academy series, would be stopping by their store that very same day from 6:00pm to 8:00pm for a book signing. Are you serious? I couldn’t believe my eyes. I literally stared at that site for several minutes re-reading their advertisement about her appearance. Because what in the world was a best-selling author such as herself doing coming to Alabama? We have no major cities, and Fairhope isn’t even the biggest city in Alabama by any stretch of the imagination (although it’s a pretty cool little place). But who cares? Spirit Bound (book 5 in the Vampire Academy series) released only days before, on May 18th. And so I guess this was just part of her book tour, albeit a weird stop along the way.

So what did I do? I panicked, a little. And then I called up my sister-in-law to tell her all about it and see if she wanted to make a spontaneous trip to Fairhope with me. It was only like 2 ½ hours away, and we have family in Mobile, so we were both semi-familiar with the area of Fairhope. We had to make this happen. I invited my sister to go with us, but at the time she hadn’t read the Vampire Academy series (she’s since listened to them all on audiobook) so she opted out of going. I literally had less than 2 hours to shower, get dressed, meet my sister-in-law in Montgomery (30 minutes away from my house), and then get on the road to Fairhope.

Holly (my SNL) finished reading Spirit Bound in the car on the way to the signing (I’d already finished it the night before at 1:40am). And we were off. We did get semi-lost. Though luckily our cousin from Mobile was able to give us directions to fix our mistake. I might have turned into oncoming traffic (who could see the concrete barrier separating the four lane? Not I). We arrived finally at Page and Palette only to be fairly close to the very back of the line. We waited patiently, 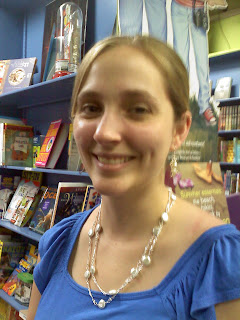 Me talking of books, especially ones we saw on the shelves and such. I was too shy to say much to Richelle Mead once we got up there. Holly didn’t so much have that problem. It wasn’t that I was star struck so much as what is there that I could say that she hasn’t heard from thousands of other fans. Luckily I had Holly with me or we wouldn’t have gotten our picture taken with her. 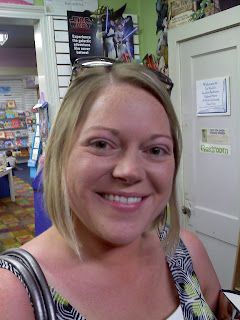 After getting our books signed (only Spirit Bound because who knew you could get your others signed too?), we walked back to our car. Drove to Chick-fil-a, where I got a #5 Combo 8-pack with a Coke, yum, and where we laughed at some teenage girls that came in, and discussed how glad we were not to be that young (more to the point, that immature) anymore. And then proceeded to drive back to Montgomery. Dropped Holly off. And then headed home to Husband and my new front door.

That was probably one of the most spontaneous things I’ve ever done in my life. It was an extremely fun road trip and I’m glad I got to share it with one of my book buddies and for all intents and purposes sister. It was a really great day. My first author signing. I’ll never forget it. 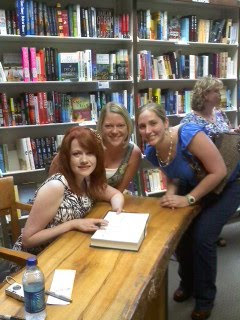 Much appreciation to Page and Palette for hosting, organizing, and however they got her there. And major kudos to Richelle Mead for taking a chance on a small town in Alabama. I’ve since learned that Page and Palette hosts events as regularly as they can and have various other book signings and author events as well. Though Richelle Mead didn’t make it back to Alabama for Last Sacrifice like I hoped, maybe Page and Palette can persuade her (or her agent, publicist, whoever) to come by for one of the Bloodlines books. A girl can hope, right? 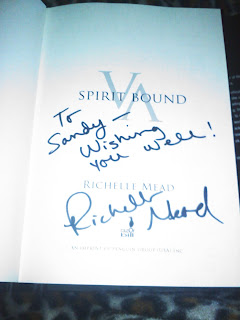 And that ladies and gent is my one experience—much longer than I intended it to be. If you have any ideas, suggestions, information, whatever about the topics I was stressing about at the beginning of this post, please feel free to leave them in my comments below, or email me if it’s too long (sandyrfarmer@gmail.com). What are your book experiences?

Posted by Somewhere Only We Know at 9:45 PM