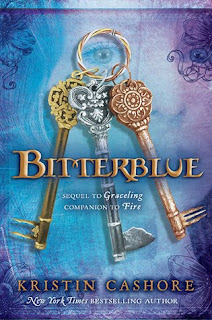 I’m finished with Bitterblue and I suppose the Graceling Realm series, unless there will be more books in the series that I’m unaware of. I still think that Fire was my favorite book out of the series. Her’s was my favorite story. But Bitterblue stood on her own. I was happy to see that while it might not be have been necessary for you to read Graceling before reading Fire, it was definitely necessary to have read both Graceling and Fire before you read Bitterblue. Kristin Cashore did a great job of tying all the story lines from both Graceling and Fire with Bitterblue.

I feel like I have a lot of opinions about Bitterblue floating around that need to be expressed. Some of them are not so politically correct. (Hey, it happens.) I guess the first thing I’ll touch on is how this book reminded me of Insurgent. In the way that Insurgent never really slowed it’s pace and one horrible thing after another happened. Well…yeah, without giving too much away, Bitterblue is very much like that. These poor characters, specifically Bitterblue, herself, have so much hitting them all at once. And bless her bones (AH!!! Not more bones!), she just can’t go mere moments without something traumatic and world-shattering happening.

Bitterblue starts out her journey in this book by being completely overwhelmed with the stacks and stacks of paper that pass across her desk. Her advisors keep her swamped with her paperwork. And little by little she realizes how much she doesn’t know about her kingdom, her castle, her advisors, her father, her mother, herself…And so she sets off with a list of things she doesn’t know or understand, hoping to find some answers. And boy does things build from there. She had herself one of those situations where the answer to one questions only creates about a zillion more questions. And none of the answers seem to be happy ones.

I can understand her need to know all of these things. To know and understand the truth about what happened during her father’s reign. But one thing I don’t understand is what took her so long to get started figuring them out? I mean 18/19, however old she actually is, seems like a few extra years too old to start wondering. And secondly, I’m pretty sure she could have (or should have) been able to guess all of the things that happened under Leck’s rule. None of the things we found out surprised me. The cutting, the rape, the forcing others to not just watch, but also participate. I don’t even feel like I just revealed anything to someone who might not have read this book, because all of that should be expected from a psychopath who can control people’s minds, right? I guess The Girl with the Dragon Tattoo helped me to expect some of the lengths that a psychopath will go to and even some of the twisted, cruel, inhumane things that they enjoy doing. So, yeah, no surprises there.

Yet, there were enough other questions that Bitterblue had on her plate to keep me far from bored. I never really had any “how could I not see that coming” moments, but I never really felt like I had EVERYTHING figured out either. It was a nice balance. Sometimes it’s nice not to try to work too hard to read between the lines and just allow yourself the freedom to receive the information as the character does. Of course, I snicker to myself whenever I figure something out before the character does, and specifically if I figure something out before others I know who have read the same book. It’s nice to think you’re “in the know.” And some things are just too obvious to pretend like you haven’t figure them out early and you wonder how for Pete’s sake the characters haven’t. But sometimes, it’s nice to relax, and not put yourself to the task of beating everyone to the punch. Again, I had the perfect balance of seeing some things coming a mile away, while also allowing myself the freedom to be somewhat surprised during the process.

Overall, I was very satisfied with this read. A good conclusion to a good series. A well deserved 4 star rating. Minor spoiler, I am glad to know that at least one of the main characters allowed herself to get married--but I won't say which one.

And now for my non-politically correct rant. I always read the Acknowledgements written by the author at the end of a book. I’m not sure if everyone does this or not, but I do. I find it interesting. Well Kristin Cashore made an apology having to do with “disability politics” in her Acknowledgements at the back of the book.

Thanks to Rebecca Rabinowitz and Deborah Kaplan, who, after reading a late draft of Bitterblue, counseled me on the matter of Po, disability politics, and whether there was any way to counter the consequences of my making Po's Grace grow so big that it compensated for his blindness at the end of Graceling. (I was not thinking about disabilty politics back then. It didn't occur to me, until it was too late, that I had disabled Po, then given him a magical cure for his disabilty--thus implying that he couldn't be a whole person and also be disabled. I now understand that the magical cure trope is all too common in F/SF writing and is disrespectful to people with disabilities. My failings here are all my own.)

I have no problem with incorrect thinking being brought to someone’s attention and that thinking being corrected. (Though what’s “incorrect” and what’s not is sometimes debated--that’s a whole other argument.) I could be speaking out of turn here, but I don’t believe it was ever her intention to suggest that Po was an incomplete/incapable person once having developed his disability, and therefore, she had to create a “magical fix” for him so that he could be “whole” again. And the point of my rant doesn’t even have to do with whether people with disabilities should be treated as “whole” individuals pr not because in fact they are “whole.” There’s nothing “wrong” with them.

What bothers me is when people jump on a person because of a perception that he or she can only do so much to control. Even as I just did in the paragraph above, we work so hard to preempt any attacks on what we MIGHT be saying that we go to great lengths to describe what we’re NOT saying just so that we’re not misunderstood. And yeah, obviously people can easily misunderstand one thing or another (see I’m doing it again), but what I’m talking about is almost willful misunderstanding.

Perhaps Kristin Cashore’s thinking did need to be corrected, I don’t know. Only she can speak to that. But I wonder how it might have affected some of the decisions she made in the writing of Bitterblue that didn’t have to do with Po. Either way, willful misunderstanding will ALWAYS annoy me. And I don’t find anything politically correct about twisting someone’s hard work into something they never intended it to be. Ok rant over. Back to pleasantries.

Posted by Somewhere Only We Know at 8:06 PM