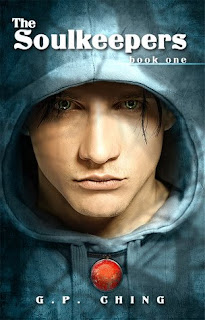 Goodreads description—When fifteen year old Jacob Lau is pulled from the crumpled remains of his mother’s car, no one can explain why he was driving or why the police can’t find his mother’s body. A beautiful and mysterious neighbor offers to use her unique abilities to help him find his mom.

But in exchange she requires Jacob to train as a Soulkeeper, a protector of human souls. He agrees to her demands, desperate for any clue to the mystery of his mother’s disappearance. But soon Jacob finds himself trapped in a web of half-truths, and questions her motives for helping him.

Wow. I have absolutely no idea where to start. I guess first let me say that I got this book on my kindle when I was going through a bit of a book drought. I can’t remember if it was free on Amazon or $0.99 or what when I got it. (It’s currently listed as free for kindle on Amazon.) But either way, I was desperate to get my hands on something to read. And the ratings on Amazon showed a high 5 star count and not too far behind that a fairly high 4 star count. Obviously those people don’t have the same standards that I do, but I digress.

I started this book MONTHS ago. At the very beginning of the book, the actual crash/accident scene, I wasn’t sold. But who’s able to tell how good a book is going to be based solely on the very beginning every single time? When Jacob was waking up in the hospital, I thought that was actually pretty well done and began to think that the book might actually have potential. However, it went downhill after that and never really recovered. This book quickly slipped into one of those books I was forcing myself to read. I’d force myself to read one chapter of this book before I allowed myself to read anything for fun. Occasionally, I’d find a chapter that wasn’t so bad and I’d willingly read two chapters. And some (very small) parts I’d even venture to say were decently written. But there just wasn’t much to keep me interested especially when compared to the things I found utterly uninteresting.

I don’t really think the description above gives a really good description of what this book is actually about. Though, honestly, I don’t feel like putting in the effort to tell you what it’s really about. Ultimately, it did have a good moral to the story—you’re not the worst thing you’ve ever done. But now that I’ve told you the moral, you don’t have to read it yourself. (Yikes, that was kind of harsh, yet it’s how I feel.)

I’m giving this one 2 stars but only because it had moments of mediocrity and a decent moral to the story. Have you guys read The Soulkeepers? What did you think?

Posted by Somewhere Only We Know at 8:32 PM