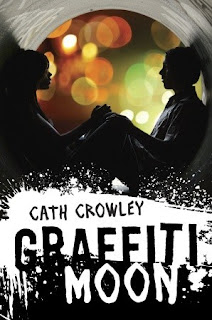 Goodreads description—Senior year is over, and Lucy has the perfect way to celebrate: tonight, she’s going to find Shadow, the mysterious graffiti artist whose work appears all over the city. He’s out there somewhere—spraying color, spraying birds and blue sky on the night—and Lucy knows a guy who paints like Shadow is someone she could fall for. Really fall for. Instead, Lucy’s stuck at a party with Ed, the guy she’s managed to avoid since the most awkward date of her life. But when Ed tells her he knows where to find Shadow, they’re suddenly on an all-night search around the city. And what Lucy can’t see is the one thing that’s right before her eyes.

When I had the option to choose which book I wanted out of those available for the giveaway(The Statistical Probability of Love at First Sight, The Fine Art of Truth or Dare, Love and Leftovers, Wanderlove, Bittersweet, and Graffiti Moon), I looked them all up on Goodreads to see their descriptions and what others had rated them. While I originally thought I was going to pick The Statistical Probability of Love at First Sight, Graffiti Moon caught my attention with the synopsis, and not just that but it was rated higher than most of the other options as well. So I changed my mind at the last minute. And boy am I glad I did. I still want to read The Statistical Probability of Love at First Sight, but I probably wouldn’t have sought out Graffiti Moon because I haven’t heard much hype about it.

Despite the decent ratings on Goodreads, I expected this book to be exactly what it sounds like. I wasn’t prepared for it to be so much more. Based on the synopsis, I wondered why in the world would Lucy just assume some guy who can paint graffiti is a guy she could fall for? I mean I get that he’s obviously talented, but the synopsis talks about birds and blue skies and I think to myself “what’s so special about that?”. But what the synopsis doesn’t tell you is that Lucy is an artist herself. AND that the way Shadow’s art is described in the book is so much more than birds and blue skies. Something about knowing Lucy is also an artist makes it more understandable how she could look at Shadow’s art and see his soul. But just some regular-Jane, non-artist person, I don’t know, that seemed kind of cooky.

And back to how Shadow’s art is described in the book…well…Cath Crowley does an excellent job of pulling you into this art-filled world. I’m not one of those people who can look at an art piece and get sucked into it. I can tell you if I think something is beautiful, quirky, or awesomely-weird, but I’m a surface kind of gal most of the time, blunt and to-the-point. But it was lovely to see Shadow’s art, and Lucy’s, through the eyes of an artist. And the words that Cath Crowley used to do so was done in a way that was nothing shy of art itself.

I’m not a huge poetry fan, though I do have an appreciation for it, and I can tell you what I like and dislike within the genre, but Poet’s words were pretty awesome too. More artistry.

The narration swaps back and forth between Ed and Lucy throughout the night, and Poet’s poetry is thrown in the mix as a separate form of narration. Sometimes the events overlapped. Like, Ed would have a chapter and when his chapter ended, Lucy’s picked up moments before his ended, so we get both perspectives on some moments. I liked this under this setting, but I can see where if I read books like this all the time, it might get old. I also liked how Cath Crowley didn’t give you 100% narration of the words said between the characters. Sometimes she just says “we talked about (insert subject)” and that’s all you really get. It leaves your imagination to play out the words for yourself. But again, too much of this would get old. I think she does it just enough so that you’re not annoyed.

The characters were also so much more real and deep than I expected based off the synopsis. Especially Ed. I do love a guy with talent. I love my kicking-butt-taking-names guys too, but I’m a sucker for an artist. It doesn’t matter if he draws, paints, sculpts, (all of which my actual husband has a talent for) or whether he plays the piano, guitar, sings, etc. Give me a guy with talent and soul and I’m hooked. Ed doesn’t disappoint and neither does Leo (Poet).

Overall I was much more impressed than I expected to be. I had a teacher in high school that told me once if a C-student exceeds your expectations on a paper, you might give him an A, and if an A-student doesn’t live up to your expectations you might give them a B or C, even if the A-student’s paper was better written than the C-students. If I were grading based off of expectations, I’d give this one 5 stars, but I am not. I’ll still give it 4 stars. Maybe even a 4.4. Check out Graffiti Moon, and let me know what you think.

Also, thanks again, to Kat @ The Aussie Zombie for hosting the giveaway that won me this book.