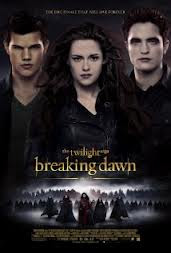 Ok guys, so I'm not going to go into too much detail about the movie because I don't want to give anything away. But I will say that this movie produced some very strong emotions out of the audience. There were cheesy parts (each Twilight movie has them). I actually have a soft spot for romantic cheesiness, but not computer graphic cheesiness which leads me to my next point. There were some unbelievable computer graphics that were decently done and some that were just well...not believable. There were parts that caused the audience to be downright outraged. And there were also parts that were awesome and gave due credit to the series.

I will say that I think this was a nice conclusion to the series and these last two movies are probably my favorite of the series (obs that doesn't go to the first movie). Despite the cheesiness that comes with all of these movies, I love Twilight. I love Stephenie Meyer. I don't overlook the faults, but I still love it despite them. Say what you will, but Twilight will always have special place in my heart.

I want to say so much more, but I refuse to spoil this experience for those who haven't had a chance to see it yet. I'm looking forward to seeing it again tonight with more of my peeps.

Posted by Somewhere Only We Know at 9:48 AM