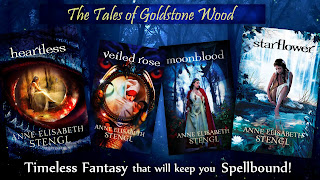 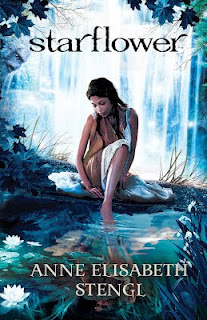 Source: ARC via Publisher (Thank you so much Anne Elisabeth Stengl & Bethany House)

NEVER GET INVOLVED IN THE AFFAIRS OF MORTALS

When a cursed dragon-witch kidnaps the lovely Lady Gleamdren, Eanrin sets boldly forth on a rescue mission...and a race against his rival for Gleamdren's favor. Intent upon his quest, the last thing the immortal Faerie needs is to become mixed up with the troubles of an insignificant mortal. 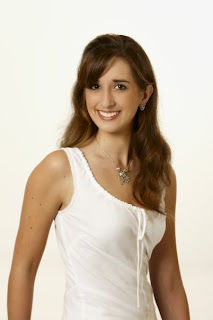 About the Author: Anne Elisabeth is the author of the Tales of Goldstone Wood, a series of fantasy adventure novels told in the classic Fairy Tale style. The series so far includes Heartless, Veiled Rose, Moonblood and Starflower, with Dragonwitch due to release summer of 2013.

Anne Elisabeth is married to the handsome man she met at fencing class and lives with him, a gaggle of cats, and one long-suffering dog in NC. Her first novel, Heartless, won the 2011 Christy Award for Debut Novel and was an INSPY Award finalist. Her second novel, Veiled Rose, won the 2012 Christy Award for Visionary Novel and was a Romantic Times Inspirational Novel of the Year finalist.

How long does it typically take you to write a book?

Well, at this point in my career I work under nine-month deadlines, which means I have a new book come out every nine months. This also means I have to write my novels in fewer than nine months each, because I have to allow for time to do rewrites and edits on other projects. I have written a novel in as few as two months (which was brutal!), and taken as much as eight months, which felt down-to-the-wire.

On the whole, I write pretty fast, though, and I like having the motivation of a deadline to drive me!

When did you decide to become an author? And what was the greatest influence on your decision?

I grew up in a family of storytellers, and I always knew I wanted to be a writer. My mother was a professional romance novelist and has sixteen titles to her name (including the award-winning Faithful Traitor). She was a tremendous influence on me when I little, always willing to listen to my story ideas, to proof-read my manuscripts, and to give me pep talks when I was down . . . pretty much exactly what she does for me now that I'm a grown-up professional!

What kind of books do you read?

I read a mixture of the classics and YA. I was an English Lit. major in college, and I developed a particular love for the Victorians and their meaty novels (currently reading Les Miserables . . . talk about meaty!). Much though I love the great literature, I think it's equally important for me to read the best writers in my genre, so I always have a YA fantasy close to hand.

What author do you admire the most?

I adore the works of Sir Terry Pratchett. He is pretty much my ideal writer with his blend of comedy and drama and fairy tale and farce. He's simply genius, able to make me laugh and cry within sentences. I'm also a tremendous fan of C.S. Lewis, George MacDonald, Megan Whalen Turner, Diana Wynne Jones, and Robin McKinley, all of them wonderful writers of fairy tales.

You mentioned in your author bio that you have several pets. What are their names?

As you may have guessed, we have an "M" name tradition in our household. Earlier this year, we had foster kittens Mo, Muppet, Muffin, Mongol, Marzipan, and Mortimer. Do I get confused? Oh, yes. But they all come to "kitty-kitty-kitty" in the end, so it's no big deal. LOL

What other types of jobs did you have before writing?

I was an art teacher for a few years, teaching both in my private studio and in a learning center. I taught children and adults, and I enjoyed very much. I also painted portraits for a little while there, acrylics, oils, or watercolors, which was fun. I worked at a Barnes & Noble for several years, a wonderful job for a book lover. I really loved my experience there. Support your local Barnes and Noble, my friends! They really are the best.

What was the book that got you hooked on reading?

I have to say C.S. Lewis's The Horse and His Boy. I had never read anything quite like it! Magic, other worlds, daring escapes, talking animals! It was a reading experience like no other, and I was hooked from then on.

Which characters have you written about that you relate to the most? And why?

I relate to all my characters on one level or another. I have a particular soft spot for Princess Una, the heroine of my debut novel. She is a silly, immature little daydreamer, but she was also the first character I ever wrote who I truly believed deep down. Her flaws were so real, and this made me love her and relate to her. She will always have a special place in my heart.

Which character was the most fun to write and why?

I love the hero of Starflower, Bard Eanrin. He is such an arrogant, self-centered, stuck-on-himself person, and it's just tremendously fun to take a personality like that and throw him into circumstances where he must think about other people. The dynamic between him and Starflower--whose core character is selfless and loving--is sometimes quite hilarious to write. They approach everything from opposite points of view!

And where did you get the idea for this series?

The first ideas for this series came to me back when I was a teenager. They were born out of a simple desire for more books in the style I liked to read; that is, fairy tale stories with meaty narratives, surprising plot twists, and unforgettable characters. An idea is not the same as a product, of course . . . and I certainly did not have the skill then to put down on paper what emerged in my head! But I started writing down short stories and novellas, filling spiral notebook upon spiral notebook. I also studied English Literature in college with the hope of learning how to bring these ideas of mine to life.

The summer after I finished school, I wrote my debut novel, Heartless, set in the world I had been building for so many years. I learned so much through writing that novel (by far the simplest story in the series) and found new doors opening to my imagination. Heartless was just the beginning of this great adventure.

Read an EXCERPT from Starflower:

The girl did not stir when Eanrin lifted her into his arms; her sleep was profound indeed. Her head lolled over his arm, and he was obliged to part her thick hair to uncover her face. It was an uncommonly beautiful face for a mortal.

However, this girl’s beauty was different from any he had ever before seen. For one thing, her skin was rich dark brown, and her hair glossy black. For another, she was imperfect. Her teeth, visible between gently parted lips, were a little crooked. Mud stained her skin, making it darker still, and her brow, even in sleep, was puckered with anxiety or fear. Her dreams must be wicked indeed.

Eanrin grimaced at the sight and almost put her down again. After all, a princess with dreams like those probably had a tale of woe to match. She would certainly wake with expectations of a handsome hero to aid her. As far as Eanrin was concerned, a dash of heroism was one thing, but commitment to a cause? Never. Rushing off to the rescue of Lady Gleamdren was different, for he had determined that she must be his wife and the sole inspiration to his life’s work. Besides, he loved her.

This creature meant nothing to him.

But blood oozed from the abrasions on her wrists. And her body, mortal and vulnerable, lay in his arms. Eanrin rolled his eyes heavenward as though to seek some holy aid. Then he braced himself and wiped the mud off her lips with the edge of his cloak. She frowned in her sleep and stirred, but did not wake.

“Nothing for it,” he muttered. Closing his eyes and trying not to smell her any more than he must, he leaned in and kissed her . . .

But you'll have to pick up Starflower to see what happens from there!

Win an autographed copy of Starflower and swag...enter the rafflecopter form below. Giveaway open to US residents only. Please see my giveaway policy for official rules and guidelines.