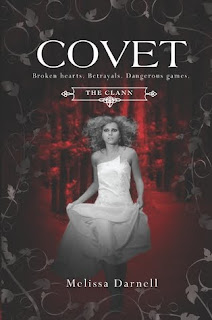 Goodreads description--Dangerous to be together. Painful to be apart. Savannah Colbert knows she broke up with Tristan Coleman for the right reasons. Most of all, to keep from killing him with her new vampire abilities. But try telling her heart. Now, lost in a sea of hostile Clann faces, Sav tries to come to terms with what she's becoming and what that means for her future. And that someone is doing their best to bully her into making a terrible mistake.

Tristan can't believe Sav won't even talk to him. If being apart is her decision, fine. Just don't expect him to honor it. But even as he prepares to fight for the girl he loves, forces beyond their control take them both in directions neither could have foreseen or prepared for.

A reckoning is coming…and not everyone will survive.

After reading Crave, I have to honestly say that I just wasn’t looking forward to reading Covet. It wasn’t that I thought Crave was bad (you can read my review of it here), I just didn’t think it was overly good either. There was nothing too much about Crave that left me feeling like I needed (or even wanted) to know what happens to Savannah and Tristan next. But, since I requested Covet from NetGalley, I felt a responsibility to read and review it. And so I trudged forth.

And I’m glad I did. Covet was infinitely better than Crave in my opinion. Even from the very beginning of the book, the action and emotion felt more heightened to me. And I generally felt like the writing and plot was better as well. In Crave, nothing really surprised me, there seemed to be quite a bit of angst and some whining. And while you’d think with how Crave ended (with Savannah promising the vampire Council that she would break up with Tristan) along with the beginning events of Covet that there would be even more whining and angst. And while both were present, I didn’t feel like either were overdone or dwelt upon for too long. There was just enough of both for the story to be believable, but not so much that it ruined the story or the characters for me.

I thought the split in the narration between Savannah and Tristan in Covet was smart. In Crave, Savannah and Tristan swap off quite frequently with no one character narrating for any lengthy period of time. That was different in Covet and for me it gave a stronger feeling of the other character being “absent.” Savannah narrates a large portion of the first half of the book, while Tristan narrates a large portion of the last half of the book. It allowed the story to be told properly in both plot and emotion.

I did feel like there was some major Twilight-ish moments in this book, and I hate to say that Twilight was the inspiration because I just don’t know that for sure. But some of the aspects just felt way too familiar. As a side note, I wonder if so many repeat books with such similar aspects is part of why readers have read Twilight, loved it, and then later have found that they don’t like it as much anymore. I can see how other books repeating the themes and aspects of Twilight might lower one’s opinion of Twilight itself. But back to the story at hand.

As for unexpected plot twists, I pretty much saw everything coming in this book. There was one small piece of a twist that I missed, but it wasn’t enough to really throw me for a loop or anything like that. However, I didn’t feel like the story was lacking too much from not having any surprises. I’m not really sure how I feel about the ending, which has led to me not being entirely excited about book 3, Consume. But since I wasn’t thrilled about reading Covet and it turned out to be much better than I expected, I’ll definitely check out Consume once it’s released.

Overall, Covet was a pleasant, surprisingly enjoyable read that I feel comfortable giving 4 Stars. Have you read Covet? If so, what did you think? Let me know!

Posted by Somewhere Only We Know at 6:19 PM