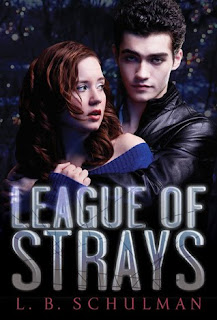 Goodreads description--This suspenseful debut follows a group of teenage misfits in their delicious quest for revenge on those who have wronged them at their high school. When a mysterious note appears in Charlotte’s mailbox inviting her to join the League of Strays, she’s hopeful it will lead to making friends. What she discovers is a motley crew of loners and an alluring, manipulative ringleader named Kade. Kade convinces the group that they need one another both for friendship and to get back at the classmates and teachers who have betrayed them. But Kade has a bigger agenda. In addition to vandalizing their school and causing fights between other students, Kade’s real intention is a dangerous plot that will threaten lives and force Charlotte to choose between her loyalty to the League and her own conscience.

Goodness, I read a couple of excellent books and everything that seems to follow is only mediocre.

League of Strays kind of reminded me of Lois Duncan’s Killing Mr. Griffin when I read the description of it on NetGalley. That being said, I probably should have had different expectations for it than I actually had. We all know often I discuss my expectations tainting my opinion of a book, and this time was no different.

I couldn’t connect with Charlotte, the main character. Prior to the league, Charlotte was a rules follower. Despite being a loner, Charlotte really doesn’t have it so bad. As a matter of fact, she has it so "not bad" that she has to embellish her own story of the worst thing that’s ever happened to her when each member of the league shares their worst experiences. Yet, because she feels the need to conform to the league and participate (and more specifically because of a crush on a certain league leader), Charlotte compromises almost all of her values. While I recognize that peer pressure is a very real thing and some of us feel a greater need to fit in and conform to our peers than others, I’m thankful that my parents instilled in me the ability to derive my own worth from myself and not from what others think of me. My dad used to say, “Are you going to be leader or a follower?” Of course the right answer was, “I’m going to be a leader, dad!” And while I had my struggles just like everyone else, and I conformed in some areas, for the most part, I was my own person. I based my actions and decision upon my value system and morals, not the value system and morals of my friends. Sure my values and morals weren’t at that age what they should have been either, but I just can’t comprehend Charlotte’s need to fit in so bad that it stoops to the level of Kade and the league.

Kade was probably the most well thought out character of the group. The rest of the characters were completely cliché…which again we all know is a struggle of mine. The plot was easily predictable and honestly not very memorable (sorry). I do have to say that things ended on a better note than I was expecting, and kudos to Charlotte for finally standing up for herself and her own moral standards instead of Kade's. Ironically enough, she ended up taking his advice.

League of Strays didn’t measure up to what I remember of Killing Mr. Griffin, but then again, it’s probably been over 10, almost 15 years since I read that one. The best I can give League of Strays is a low 3 Star rating.

Have you read League of Strays? If so, what did you think? Let me know.