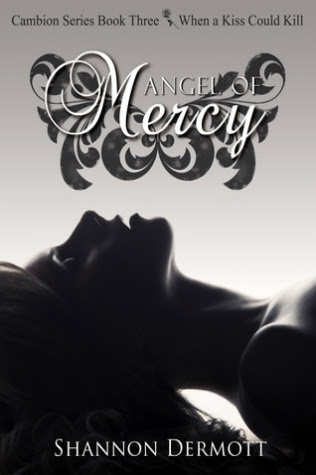 Goodreads description--Mercy wants to put the broken pieces of her life back together. She’s on a mission to make right all the things that have gone wrong. Most of all, she’s wants her relationship to work but someone is hell bent on not letting that happen. Will bringing her enemies close backfire?

First off, let me say that Angel of Mercy did suck me in. It's almost like no matter how frustrated I get with these books, I can't quit reading them. It's probably the killer cliffhanger endings. I don't know. Even Husband commented on how much I was sucked in to this one, and normally he doesn't mind at all.

In my past reviews of the earlier books in this series, I was pretty annoyed with Mercy and her inability to choose one of these hot guys that she has competing for her. Luckily between book 2, Waiting for Mercy, and book 3, Angel of Mercy, we've at least knocked one of those guys from the love-pentagon and so we're back to a love-square. Normally when reading, I seek out whichever character the main character is drawn to and has more feelings for and that's the character that I root for, but I just can't in this series. Despite how often Mercy distinguishes between her feelings for Luke over any of the other guys who want her, I still can't root for Luke. I just can't.

In my review of Waiting for Mercy, I said "whatever happened to forbidden love that stays forbidden?" And that's essentially still how I feel. Between the condemning of Luke's soul in Waiting for Mercy because they refuse to end their relationship coupled with the ending of Angel of Mercy and what happens with Luke there, I just really need this relationship to be done and over with. While, I fully realize that Mercy is in love with Luke and that's different from how she feels about the other guys, I just feel like everything working out hunky-dory with Mercy and Luke is too predictable. So I say all of that to say that I'm rooting for Flynn. If everything works out for Mercy and Luke...well I don't know what I'll do. But I won't be happy about it.

Mercy does finally get SOME information about what's going on that her family and friends have left her in the dark about and so as a reader that was satisfying. If we had stumbled through this book only to end with the same questions unanswered I probably would have screamed, but Mercy's mom finally gives her some answers. We find what's going on with Flynn and the deal with Sebastian. It was just a relief to finally have some answers. Of course, Angel of Mercy ended with an entirely new set of questions.

More than anything what I was beyond annoyed and frustrated with was the amount of errors in this book. Between grammar, continuity, missing words, misspellings, even a double negative, I think I found upwards of 50 errors, and I assume that I didn't catch them all. Guys seriously, I really try hard not to be too hard about this because I know grammar is a weakness of mine, and I don't have anyone to edit my blog so I know there are mistakes upon mistakes. I know Shannon Dermott has an editor because she mentioned her editor (not by name of course) in the email she sent out about ARC copies. I don't even know what to say about this. I seriously don't blame Ms. Dermott for this because out of 70,000 some odd words (that's totally a guess on my part) 50ish mistakes isn't that much, but I do blame her editor.

All in all, I'd give Angel of Mercy 3 stars. I do plan to read the next book because I can't seem to pull away from this series. Have you read Angel of Mercy? If so, what did you think? Let me know!

*Update - Ms. Dermott is having the book re-edited. Hopefully this last pass through the editing process will clear up the errors I mentioned above.*