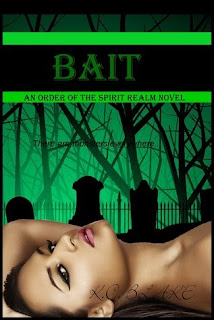 Goodreads description--Ghosts, a reaper, and a rock star.

At sixteen Bay-Lee is not your typical girl. She doesn't even try to fit in at school. What's the point when she'll be moving to a new place within a few months? She's lived her whole life on the run, hiding from monsters.

Then a reaper uses her closet to cross over from the Spirit Realm. It has a message for her. Just when she's about to join her father at his school for hunters she finds out they are dying on their birthdays. Something is killing them, slipping past locked doors, never leaving a trace of evidence, and her birthday is only two months away.

Becoming a hunter isn't exactly her dream come true. She's doing it for her mother, for revenge, for justice. Nothing is going to get in her way, least of all love. Then she looks up into a pair of jungle green eyes and everything changes.

Bait is also available in ebook form from all the usual suspects in online retailers.

Bait came highly recommended to me by my sister-in-law and fellow blogger, Holly @ Words Fueled by Love. So I decided to check it out and join the blog tour. I liked the idea of a series being about Van Helsing's daughter. While there might be a whole heap of books dedicated to all things Van Helsing, I've never actually read any of them, so Bait came off as being an original (or at least, new) concept to me.

Bait does have an insta-love kind of relationship going on that I know many readers will shy against. While I understand instant attraction, I have enjoyed the insta-love theme of a lot of paranormal books less and less lately. Of course this comes double when the relationship is forbidden. Sometimes forbidden love is the best kind to read about, and sometimes it's just annoying. I can't quite decided which way I felt about Bait's forbidden romance. Without getting into to many details, there's this whole prophecy thing. And while I like the idea of everything a character does (fighting against or not) actually brings them closer to the prophecy versus working to break the prophecy, what I don't enjoy about prophecies, curses, and destiny is when it just changes randomly. But that's enough about that.

It's hard to describe the way I feel about these characters. At some points, I really liked them and felt like KC Blake did a good job flushing out their motivations and backgrounds. But at other points I felt like behavior was out of character or left unexplained. And sometimes I felt like perhaps the writing wasn't as deep as I prefer--but only just barely. There were moments that I can't discuss in detail because of spoilers that I just wanted more from. And the questions that I was left with at the end of the book weren't so much about what's to come in the sequel, but more about things within the characters that I didn't understand.

Keisha for instance. I couldn't decide throughout the book if I thought she was good or bad, real or fake. I am still left wondering. For the majority of the book I felt like this was probably good writing...keeping me guessing. Because it's true, I didn't guess the culprit. I was torn between praying that it wasn't the obvious person and not knowing how it could be any other person. After Bait was over, I was left feeling like perhaps Keisha wasn't as flushed out as she should have been. Maybe this will play into future books in the series, but I felt her behavior was often contradictory. Even Bay-Lee and Nick had moments that behavior seemed out of character to me. *shrugs*

I wanted to be hooked. I wanted to blow through this one as quickly as my sister-in-law had. I wanted to be fanning myself from the steamy romance....but I wasn't. It took me longer to read that I wanted. I'd get hooked for periods of time and not want to put the book down. But looking back over the entire book, I feel I was left being more confused than anything else. Bait gets 3.5 Stars from me. Have you read Bait? What did you think? Let me know!