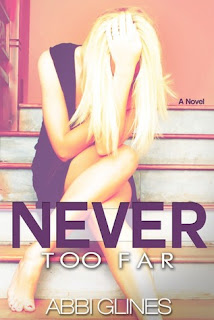 Goodreads description--He had held a secret that destroyed her world.

Everything she had known was no longer true.

Blaire couldn’t stop loving him but she knew she could never forgive him. Now, she was back home and learning to live again. Moving on with life… until something happened to send her world spinning once again. What do you do when the one person you can never trust again is the one that you need to trust so desperately?

You lie, hide, avoid, and pray that your sins never find you out.

So I didn't review book 1 on my blog, though I did review it on Goodreads here. Abbi Glines pushes my limits on graphic writing, but since I have a hard time not finishing what I start, I really wanted to see what happened to Blaire. Bless her bones. Her twin sister died in a car accident several years ago. Her father left shortly after that. Her mother was then diagnosed with cancer. Blaire cared for her mother until she finally passed away. All of those events lead up to book 1, Fallen Too Far. At the end of Fallen Too Far, Blaire finds out that she has a half-sister that she never knew about. And there are some things that she finds out about her mother and father that force her to flee back to her home town leaving the only boy she ever fell in love with behind. Poor Blaire feels more alone than ever. On top of all of that, Blaire moves into her ex-boyfriend's grandmother's house temporarily until she can get back on her feet.

I felt sorry for Blaire. Hers felt like one of those stories where you can't imagine how much more can happen to a person. Yet she continued to stand strong, to take care of herself, to do whatever she has to do in order to survive. Pretty much the only friend Blaire has begs her to come back to Florida and live with her which Blaire does, effectively throwing herself back in the line of Rush who happens to still be head over heels in love with her. Aside from all of that, there's a line that's tying Blaire and Rush together no matter what happens anyway.

Rush is a bit on the possessive side (that's an understatement), and while this is definitely unhealthy, I find myself being extremely attracted to that possessiveness. My husband is extremely laid back, and while I love that about him, he pretty much never gets jealous--not that he has a reason to. Just saying that the passion that Rush feels over Blaire is a bit attractive--while being a bit scary at the same time. I also found myself getting really annoyed with Rush over his stupid decisions. He's usually completely aware of the fact that he's being a jerk in the moment, but refuses to make the choice not to be, despite knowing that he's hurting the person he claims to love the most. SMH.

I liked that Abbi Glines tackled a subject that I don't read about frequently and is very much a consequence of the life these characters were living. And I wasn't expecting this to be part of the story line for this book, though looking back, the foreshadowing was majorly thick in Fallen Too Far.

All in all, I'd give Never Too Far 3.5 stars. I heard that the series continues with a companion novel focusing on Nan, and I wasn't thrilled to say the least, but throughout Never Too Far, I found myself wondering if a certain event was going to go down in Nan's life so I'm intrigued to find out if I'm right--though I don't see anything on Goodreads about said companion novel. Can't wait to get my hands on Forever Too Far as I've already heard tale that it's really good. Have you read Never Too Far? What did you think? Let me know!