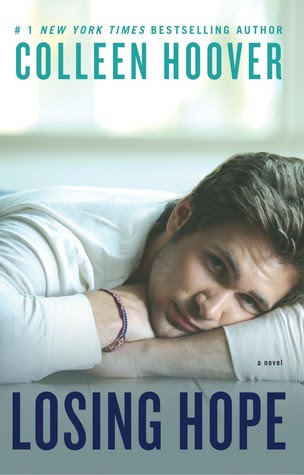 In Hopeless, Sky left no secret unearthed, no feeling unshared, and no memory forgotten, but Holder’s past remained a mystery.

Still haunted by the little girl he let walk away, Holder has spent his entire life searching for her in an attempt to finally rid himself of the crushing guilt he has felt for years. But he could not have anticipated that the moment they reconnect, even greater remorse would overwhelm him…

Sometimes in life, if we wish to move forward, we must first dig deep into our past and make amends. In Losing Hope, bestselling author Colleen Hoover reveals what was going on inside Holder’s head during all those hopeless moments—and whether he can gain the peace he desperately needs.

Oh Colleen Hoover! What more can I say about the wonderfulness that is your writing? Can it be possible that I enjoyed Losing Hope even more than I enjoyed Hopeless??? Yes, I think it is possible.

Because Losing Hope is a retelling of Holder's POV, there isn't much that is a plot twist, but Colleen Hoover does a great job of showing us so many scenes from Holder's perspective that don't even include Sky. And I can't help but have a broken heart for Holder with the burden of the knowledge that he carries and knowing how dramatically it can and will change Sky's life. And I think that's what makes Losing Hope better than Hopeless to me.

In Hopeless, I was completely lost and confused, as Sky is, about why Holder flipped about seeing her bracelet in the cafeteria that day and all these other tiny details. It's hard to believe that Colleen Hoover wrote Hopeless first because of how perfectly everything fits together. She must have been completely acquainted with Holder's thought process before putting it to paper because the two sides of the story fit perfectly.

The one critique I have about Losing Hope is Holder's understanding of forgiveness. I don't remember this standing out as much in reading Hopeless, but in Losing Hope, Holder is adamant about Sky not forgiving him for flipping out on her when he saw her bracelet and for being absent for like a month. He says that he doesn't deserve her forgiveness and basically that he doesn't want her to be less than she once was by giving it to him. "If she forgave me, I feel like she would be compromising her strength. I don't want her compromising anything about herself for my sake." This to me shows that Holder doesn't truly understand forgiveness. By definition no one deserves forgiveness. If you've done something that needs forgiving, you are therefore unworthy to receive it. And forgiveness does not make the forgiver LESS than...I've never known someone who has truly forgiven something big and horrible and ugly that I can say that person is less than they once were for offering their forgiveness. If you've ever witness someone who has truly forgiven the unforgivable you know that that person is so much MORE than any other person. They become the bigger person. They are not less than...they are more than. I like to hope that Holder's understanding of forgiveness grows and changes as he continues to deal with Lesslie's suicide and he comes to forgive her. Surely he doesn't feel "less than" for doing so.

Another section I wanted to focus on is how Holder tells Sky exactly what he needs from her after they get back from talking to her dad. He wants her to comfort him as he's comforted her in times past, but Sky can't read his mind. And so he tells her. So often we want our significant other to read our minds and just know what we're craving and what we need, but no matter how much we want that, they just can't. We have to step up and ask for what we need. I loved this little piece of the story. Kudos Holder. Kudos Colleen Hoover.

Losing Hope gets 5 Stars. Can't wait to read more from Colleen Hoover. Have you read Losing Hope? What did you think? Let me know!

Posted by Somewhere Only We Know at 4:51 PM