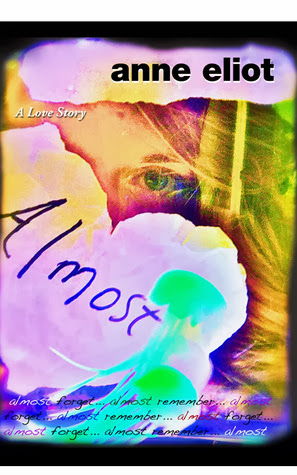 Almost was my 2nd—I think—book that I borrowed from Amazon Prime’s Lending Library. I enjoyed the first book I read from there, Crossing Oceans by Gina Holmes, but truthfully I’ve kind of had a hard time finding titles here that I’m interested in. Most of them are adult romance/erotica—which I don’t read. So I came across Almost by Anne Eliot. Let’s not pull any punches here, the cover for this book SUCKS! It’s awful. I don’t think there is anyone out there who would pick up this book based upon the cover. But, the description pulled me in and so I checked it out—like 2 years ago! Oh my goodness. That was about the time that I started blogging more seriously and so other books just took priority. Almost was literally number 2 on my TBR books in my possession spreadsheet, which means I’ve had it the longest out of all the 90+ books I have in my possession to read. Yikes!

Most of you probably know that I tend to read multiple books at a time. And when there are books that I know I want to read, but I’m not all that excited about them, I’ll tell myself to just read 5 pages or so and then read something else that I am excited about. So that’s how it was with Almost. I picked it up expecting to read 5 pages or so and then put it down to read something else that I WANTED to read, but I ended up not putting it down. I was hooked. From very early on.

The first couple of pages had me rolling my eyes a little bit, but it didn’t take me long to realize that the small details I was slightly annoyed with actually made sense in relation to the overall story of this book. Now I will say, that Almost isn’t really an original concept. There’s the girl who’s emotionally scarred based off of a sexually abusive situation. And there’s also the whole fake relationship deal. We all know that I get so fed up with clichés (see my review of The Bet or The Wager by Rachel Van Dyken), but I’ve also said that this doesn’t bother me when it’s done well (Ten Tiny Breaths by KA Tucker). And the latter was the case with Almost. There might have been clichés, but I felt like they were handled so well and made sense in such a way that it didn’t really bother me that this story has been told time and time again. I was hooked into these characters and into their story.

Jess Jordan, as the description above states, was almost raped. She doesn’t really remember the event in detail due to some suppressed memories and the fact that she was likely drugged. But she has nightmares about the event quite often. She’s been to therapy. And mostly she just wants normal back. She doesn’t want her family worrying about her all the time. She’s tired of the overprotective and overzealous behavior of her parents. She just wants to go to college. So she’s convinced herself that if she can appear normal then her parents will agree to let her move out and go to college when the time comes. Therefore, landing this summer internship and having a boyfriend is about as normal as she thinks she can be. She’s determined to succeed. Truthfully I connected with Jess. I didn’t always agree with her choices, but I rarely agree with any one character on everything. I felt for her. She’s been through so much. And she was literally trying so hard. I really enjoyed how Anne Eliot played up her inability to sleep throughout the whole book. It was believable and cohesive.

Gray is the leading male of our story here. He’s an all-around good guy. He’s made some mistakes in his past and he’s determined to atone for them in whatever way he can by helping Jess in whatever way she needs him. Gray has truly honorable intentions, and I fell for his character big time. Just as much as I felt bad for Jess and all she’s been through, Gray’s been through a lot as well. And I couldn’t help but admire how his actions have motivated him to do better and be better. Truly the kind of leading male I like to read about.

Almost had me tearing up at one section and it’s probably not even the most emotionally charged section of the book. I just felt so deeply what Jess was feeling—how exhausted she must be—and my heart broke for her. Any book that can pull this out of me is one that I can’t recommend enough. Though Almost isn’t a completely original story, Anne Eliot had me right where she wanted me. Please ignore the horrible cover, and check out this book.

Almost gets 4 stars from me. Have you read Almost? What did you think? Let me know!