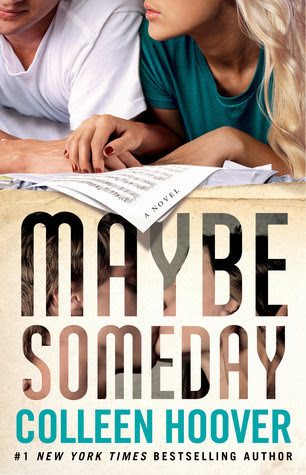 Goodreads description--From #1 New York Times bestselling author Colleen Hoover, a passionate tale of friendship, betrayal, and romance—and the enchanting music that inspires one young woman to put her life back together.

At twenty-two years old, aspiring musician Sydney Blake has a great life: She’s in college, working a steady job, in love with her wonderful boyfriend, Hunter, and rooming with her good friend, Tori. But everything changes when she discovers Hunter cheating on her with Tori—and she is left trying to decide what to do next.

Sydney becomes captivated by her mysterious neighbor, Ridge Lawson. She can’t take her eyes off him or stop listening to the daily guitar playing he does out on his balcony. She can feel the harmony and vibrations in his music. And there’s something about Sydney that Ridge can’t ignore, either: He seems to have finally found his muse. When their inevitable encounter happens, they soon find themselves needing each other in more ways than one…

From the author of the New York Times bestsellers Slammed, Point of Retreat, Hopeless, This Girl, and Losing Hope, Maybe Someday is destined to another bestseller and long-lasting fan favorite.

You guys I’m not even sure this review is going to make any sense, but I’m going to try to sort through my thoughts. First off, let me say that out of all of Colleen Hoover’s books, Maybe Someday is the one I was most excited for and most looking forward to getting. Music was such a big influence in my own developing relationship with my husband even before we started dating and leading all the way up to our wedding. Because of this, the idea of reading a book that even kind of has a similar storyline—two people falling in love over music, being able to say through the lyrics of a song what they can’t bring themselves to say to each other’s faces—was something that I was ecstatic about. But I’ve also discussed a bit in the past about how my expectations can alter how I feel about a book. All of that being said, I think Maybe Someday needs a slightly different process for my review. I’m going to break this down.

Cover: 4/5 – It’s not necessarily the most visually appealing book cover necessarily for me. By that I mean had I just been browsing books by cover and didn’t know anything about the synopsis or about Colleen Hoover, I’m not sure if I would stop on this one to check it out or not. However, this cover definitely covers the span of the book. The way Ridge’s hand covers Sydney's. The sheet music. And the kissing shown through the letters. It all spells out the key things you need to know.

Music: 4.5/5 – Reading the lyrics within the story made sense, but there was just something missing. Once I scanned my QR Code and listened to the song WHILE reading the lyrics it made so much more sense. The music behind the lyrics does so much to set the tone. I’m not 100% sure that I would seek out every one of these songs were they not connected to this story, but there are definitely several that need to be added to my regular play list. (Sidebar- Griffin Peterson…you need to get your music on Pandora. Thank you very much.)

Characters: 4/5 – How I feel about the main characters, Sydney and Ridge, is so completely tied to how I feel about the story itself. So I’ll discuss that later. The side characters were fleshed out as most of Colleen Hoover’s side characters are. Warren was my favorite as I’m sure most people will agree. Bridgette, Tori, and Brenan didn’t make enough appearances for me to firmly establish much feeling about any of them. Hunter was a huge DB. And Maggie…well…I’m not really sure how I felt about her. Would I be surprise if Maggie gets her own book? Absolutely not. Would I read that book? I most certainly would.

Story: 4/5 – Oh guys. There’s so much I want to say, but where is the line? You know? What’s considered a spoiler and what isn’t? Maybe Someday’s storyline was not what I expected at all. And to be honest that’s not really meant in a good way. We already know from the description above that cheating is involved in this book, but what I didn’t know was how prevalent of a role it would have in the overall story. It sounded like something that happens early on or maybe even before the story begins and is just something that Sydney is dealing with emotionally, but cheating is more of an ongoing topic for this book. While I felt like Colleen Hoover’s portrayal of events was true to real life, I found myself not fully feeling like I could root for these characters like I had hoped to be able to do. And so much of how I feel about this book is wrapped up in the topic of cheating that I feel like I can’t really discuss the book itself without giving too much away or without going on a complete tangent about the evils of unfaithfulness.

I understood Sydney. I could feel what she was feeling, yet I couldn’t fully support her. And I couldn’t fully merge myself with her. I did find that Sydney cried a lot which is another thing that’s difficult for me to relate to. At this point in my life, I’m not an easy crier. And this is actually saying a lot because I think I’ve at least teared up reading every single one of Colleen Hoover’s other books.

Ridge. I both loved and loathed him. I fell in love with his talent for music and a few other characteristics. I always find guys who are talented in the arts some way to be extremely attractive. Ridge was no exception. However, I actually couldn’t understand how he felt and acted and behaved as much as I could Sydney. I felt like he got off easy. What I mean by that is that every time he would have been forced to make a hard decision I felt like the cosmos would give him an easy out. Or maybe he would make a hard choice between two different paths, but then one of the paths would come to a dead end so he was forced to backtrack and then take the other path thus essentially making his decision for him.

At one point toward the ¾ mark, I was really starting to get upset because I felt like there was no path these characters could take that I would be satisfied with. In the end, I was okay with how everything wrapped up except for the pieces that felt “too easy.” While Colleen Hoover definitely made me feel a lot of emotions through this book, I’m not sure they were all emotions that I wanted to feel. Truthfully, there’s so much more that I want to say concerning Maybe Someday, but I feel like it’s too close to being spoilers and I want to review this spoiler free.

I thought this one was going to be harder to rate, but once I look at the breakdown of everything I have listed above, 4 Stars seems like the right rating. Have you read Maybe Someday? What did you think? Let me know!