A Feast for Crows - Review 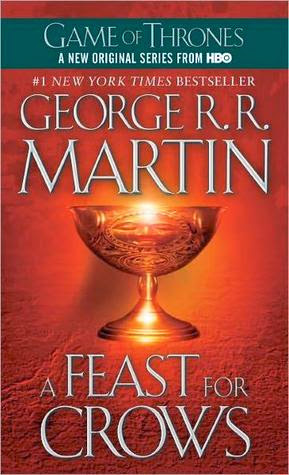 Goodreads description--With A Feast for Crows, Martin delivers the long-awaited fourth volume of the landmark series that has redefined imaginative fiction and stands as a modern masterpiece in the making.

After centuries of bitter strife, the seven powers dividing the land have beaten one another into an uneasy truce. But it's not long before the survivors, outlaws, renegades, and carrion eaters of the Seven Kingdoms gather. Now, as the human crows assemble over a banquet of ashes, daring new plots and dangerous new alliances are formed while surprising faces—some familiar, others only just appearing—emerge from an ominous twilight of past struggles and chaos to take up the challenges of the terrible times ahead. Nobles and commoners, soldiers and sorcerers, assassins and sages, are coming together to stake their fortunes...and their lives. For at a feast for crows, many are the guests—but only a few are the survivors.

Oh boy! You guys, I FINALLY finished A Feast for Crows. I started this book in June or July of 2013 and finished it January 21, 2014. I would read one chapter in A Feast for Crows and then read something else shorter for “fun.” And that’s how I made progress. I’ve been trying to stay ahead of the show. I know that season 4 is going to be a mix from books 3, 4, & 5 because Season 3 didn’t end where book 3 (A Strom of Swords) ended. There’s more to come there. But I also know that Season 4 will include some stuff from book 5 (A Dance with Dragons) which I plan to start ASAP.

All of that being said, I would have finished A Feast for Crows sooner but this was a SLOW book for me. All of the books in this series have started off slowly and built until they ended with some pretty major events. And while the last 20% of this book definitely had bigger things happening, the cliffhangers weren’t as big as the ones in books past. The speed at which I can get through a book always plays into my overall experience of the book, but a slow book that’s 300 pages long is completely different from a slow book that’s over 1000 pages long. I was more than 600 pages in—probably more like 700 pages—before events started picking up pace. For the earlier parts of the book, I was wondering how most of the events even played into what happened in the previous books. That wasn’t exactly the right question. The better question would have been how those events played into the ending of this book. Due to the length and pacing of these books, I definitely expect that this series is not for the average reader, but A Feast for Crows even more so. At one point I told my SNL, Holly @ Words Fueled by Love, that if some big things didn’t happen in the last half of the book then I was going to tell her to skip it and I would just tell her what happens. I’m not sure what I would recommend for her at this point. (She's reading it anyway just in case you're wondering.)

Now to talk about the story itself.

Unlike the previous books in the series, A Feast for Crows focuses on a smaller section of main characters. George R R Martin puts a note at the end of the book that he didn’t forget about the other characters. He was writing this book and realized it was too big to publish without breaking it in half and instead of giving ALL of the characters half their story he decided to split the characters and give all the story. So A Dance with Dragons will focus on the characters that weren’t focused on in A Feast for Crows. The main narrators of A Feast for Crows were Jamie, Cersie, Brienne, Arya, Sansa, and Sam with a few chapters here and there narrated by a random additional character.

I did highlight a good bit in A Feast for Crows. I don’t think I’ve ever highlighted in any of the previous books in this series. These highlights were focused around things I thought might offer some foreshadowing. But truly it is so hard to tell with George R R Martin if he’s even foreshadowing at all. Sometimes when reading this series, I find myself wondering if there was a point to what I’ve been reading at all when all of a sudden a big surprise comes in and one of our characters gets killed off. Most books I consider masterpieces are the ones where every piece of information is important and fits into the overall story in just the right way. But with George R R Martin, I often wonder how much of any of it has a point and if that in and of itself isn’t the brilliance of this series.

A Feast for Crows is definitely different from the previous books in this series. And while I won’t say that I didn’t like it, I can see how it would be my (and many others’) least favorite of the series. I do look forward to seeing how everything continues to play out, and I look forward to getting back to the other characters that I’ve missed. I know I haven't really given you any information involving the storyline at this point or even discussing the character growth, but I just feel like both of these things are such important aspects of the story that I can't spoil anything for you.